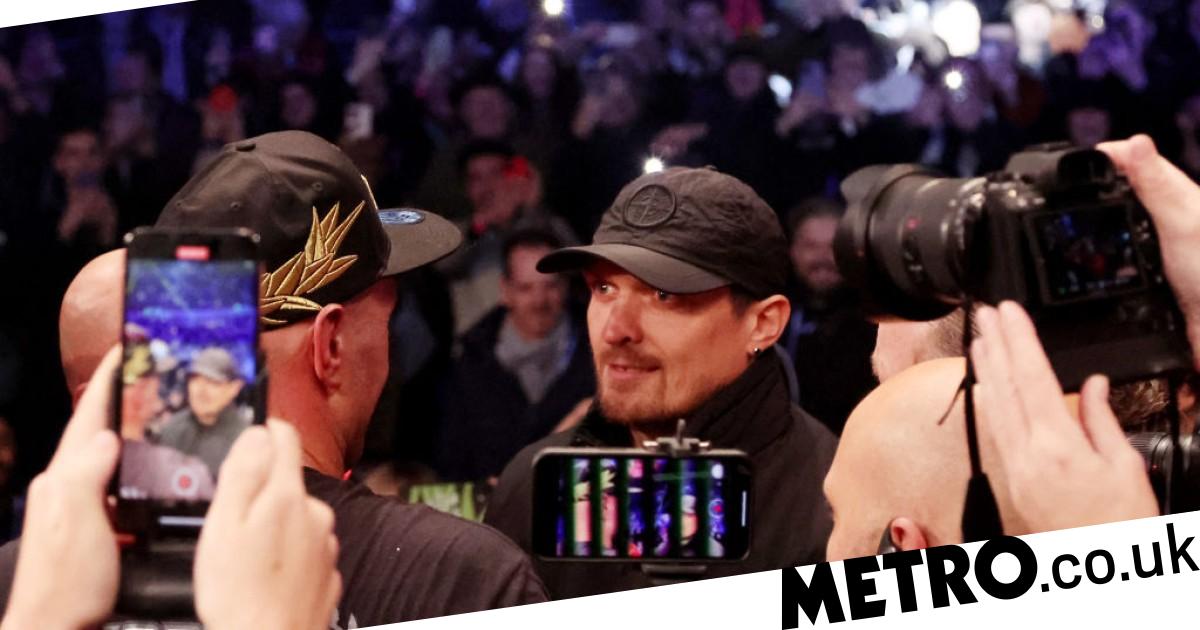 Tyson Fury hurled abuse at Oleksandr Usyk as the two shared a tense stare down ahead of their eagerly anticipated undisputed heavyweight clash in early 2023.

‘The Gypsy King’ defended his WBC title in a comfortable victory over old rival Derek Chisora on Saturday night, outclassing the Londoner in their trilogy fight which was waved off in the 10th round.

WBO, WBA and IBF champion Usyk was watching on from ringside at the Tottenham Hotspur Stadium with Fury inviting him to the ring after the fight.

‘The Gypsy King’ repeatedly goaded Usyk and his team with just the ropes separating them, hurling insults at his rival who stood in silence before breaking into a grin.

‘You 15 stone little midget who beat a body builder [Anthony Joshua], well I ain’t a body builder, sucker,’ Fury bellowed into the microphone in front of his unflinching rival.

‘I’m going to write you off. I already did one Ukrainian in [Wladimir] Klitschko and I’ll do you as well gappy teeth. You ugly little man, let’s get it on.’

Their bout, which is expected to take place in March or April with Saudi Arabia a frontrunner to host, will crown the heavyweight division’s first undisputed champion since Lennox Lewis.

Having conquered the cruiserweight division, Usyk moved up to heavyweight in 2019, beating Chisora before getting his shot at Anthony Joshua last September.

The Ukrainian put on a wonderful boxing display to take the world titles from Joshua, defending the belts in similarly dominant fashion in August in their rematch.

Fury meanwhile has held the WBC belt since blasting out Deontay Wilder in February 2022.

The Manchester heavyweight previously held the WBO, WBA and IBF titles in his first stint as world champion, taking the titles from Wladimir Klitschko in 2015 before being stripped.


MORE : ‘Get in the firing line!’ – David Haye warns Tyson Fury and Derek Chisora must ‘deliver entertainment’ in trilogy fight


MORE : Tommy Fury responds to Jake Paul’s offer to fight in London or Manchester in February