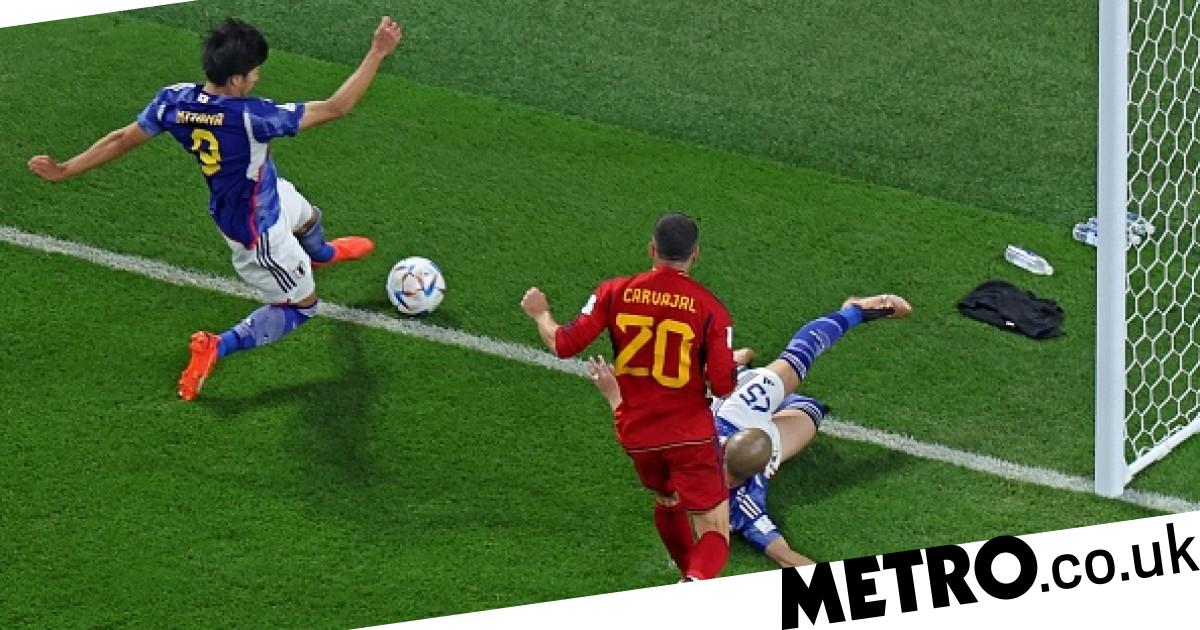 Japan’s decisive goal against Spain was allowed to stand because the curvature of the ball did not go out of play.

A 2-1 victory over Spain sent Japan through as group winners with a result that also saw Germany eliminated from the competition at the group stage.

Japan’s second goal was highly contentious however with replays initially suggesting the ball had gone out of play before Kaoru Mitoma managed to cut back his cross for Ao Tanaka to bundle home from close range.

A lengthy VAR check concluded the whole of the had not crossed the line.

The law states the ball remains in play ‘if the curvature of the ball is over the line’, which was deemed the case despite a lack of immediate replays suggesting so.

Former Premier League referee Peter Walton argued that while the ball did appear to have gone out through the naked eye, he told ITV that Fifa must have seen images confirming the curvature of it was still over part of the line, leaving it still in play.

‘I’m seeing the same angles as you, there’s a misconception in law that just because the part of the ball that is on the floor is over the line is out – well it clearly isn’t because it’s the curve of the ball,” Walton said.

‘We see it often with corner kicks where it’s over the line but not quite over the line. In this instance, what the VAR is looking for is the evidence to suggest to the referee that the ball has clearly left the field of play and on the evidence that we’re seeing, he doesn’t have that in front of him.

‘What I would suggest is the goal line technology, those cameras are being used for VAR to discover whether it has left the field of play so there are angles that will show that. If, however, a player’s boot or a player’s shin has gone over the top of the ball can’t see it clearly then the VAR will say to the referee: ‘I don’t have that evidence to give you, Mr Referee, stay with your on-field decision’.

‘We’ll see what pictures FIFA show us but the law is specific, the ball is still in play if the curvature of the ball breaks that line – do we have that evidence to show?’

ITV pundits Graeme Souness and Gary Neville were left fuming with the lack of definitive imagery proving the ball had remained in play, an issue which also perplexed Walton.

‘I’m at a miss why they haven’t showed it yet, they’ve got their reasons and only time will tell. I do think the evidence will appear sooner or later whether that ball hasn’t crossed the line.’

Speaking on beIN Sport, another Premier League official in Mike Dean shared an image which he believed proved the ball was still in play.

‘There is an angle I have managed to get hold of. When you look at that you can’t see any of the green grass between that ball and the white line.

‘The technology would be that because every player has got like 29 data points on the body, they will know when the player has kicked the ball, when the foot touches the ball that will trigger off a signal in the ball and on the player.

‘That will know when the player has touched the ball and whether it went out or not and it didn’t.’

He added: ‘There is one angle I have seen before, an angle bang from where the corner flag is looking down and it doesn’t look like the ball is out. I think that was the correct decision, they wouldn’t have made up a decision for the sake of it, they would have used the technology and got to the right decision.’