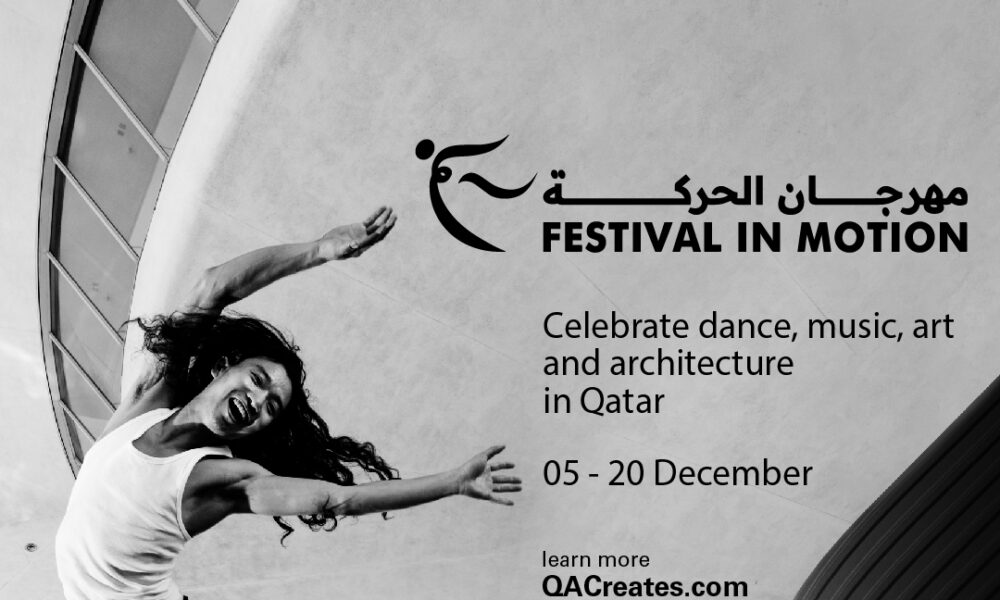 
Qatar Creates has announced Festival in Motion, a major international dance and music programme with more than 55 site-specific performances at some of Qatar’s most significant architectural landmarks, from December 5-20 2022, coinciding with the FIFA World Cup Qatar 2022.

The 13-day programme showcases more than a dozen exceptional artists from around the world. Audiences can view the performances free of cost in exceptional locations across Qatar, including museums (the National Museum of Qatar and the Museum of Islamic Art), public art installations (Richard Serra‘s monumental desert installation East West/West East at the Brouq Nature Reserve in Zekreet and Tony Smith‘s Smoke at the Doha Exhibition and Convention Centre, Olafur Eliasson’s Shadows travelling on the sea of the day in Al Zubarah) and heritage sites (Historic Barzan Towers).

We have made it our strategy to take our art to the neighbourhoods and cities of Qatar. From the airport to every part of the country, the landscape is open for people to experience arts and culture, complementing our landmark museums and collections. For the World Cup we have invited Benjamin Millepied and Nico Muhly to curate modern dance performances representing dancers from all around the world.  The Festival in Motion, the first of its kind, will combine the discipline of dance with architecture, art and music.  We hope that these performances will inspire people to think of the unlimited possibilities of creativity.

Benjamin Millepied will appear in his own work for a special one-night-only performance with the L.A. Dance Project on the late afternoon of 20 December with live music by Nico Muhly at the site of Richard Serra’s East-West/West-East.

Among the choreographers and performers featured in the programme, some appearing in the Middle East for the first time, are:

The opening of its own studio and theatre space in 2017 has allowed LADP to create and premiere its work in its hometown and cement itself as a destination for world-class dance in Los Angeles. The company’s 18 dancers perform a repertory that includes commissions by new and established choreographers, revivals of important historic works, and interdisciplinary collaborations.

The 13-day, free programme will take place in locations including:

For more information on the full programme including dates and times of performances, please visit their website. Tickets are not required.

Festival in Motion is one of 300 exciting activities, from cultural events to fashion shows and performances, delivered by Qatar Creates during the FIFA World Cup 2022™ in November and December. Qatar Creates One Pass is a gateway to arts and culture for all residents and visitors, providing exclusive access and discounts to art and cultural exhibitions, museums, live events, festivals, theatre, musicals and more.