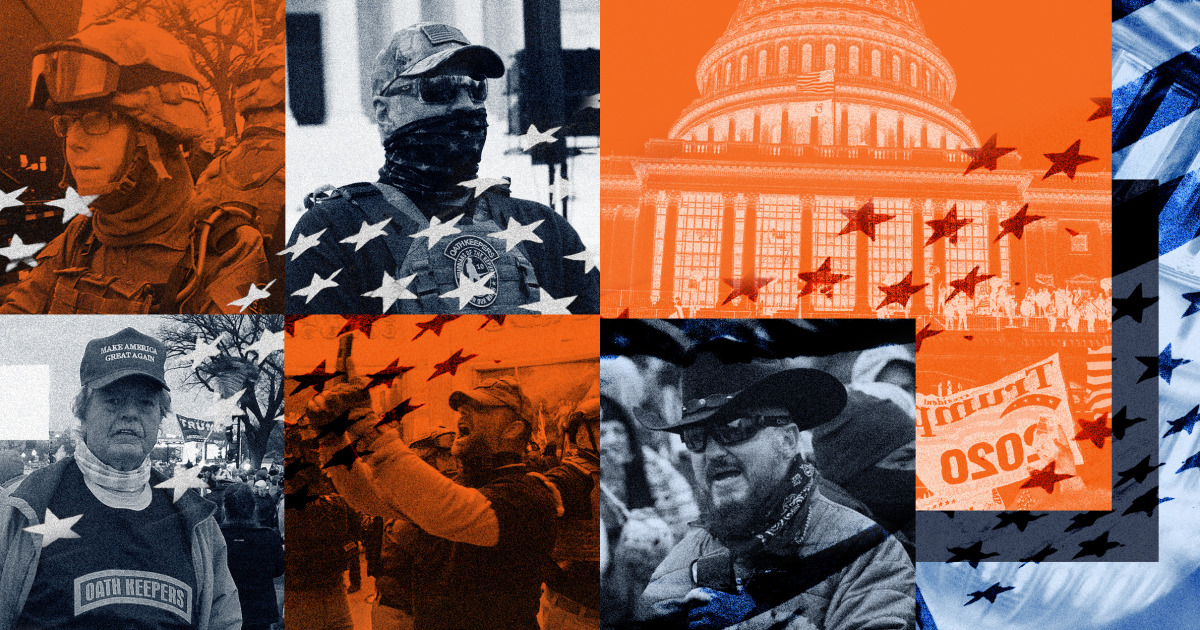 WASHINGTON — A federal jury in Washington has reached a verdict in the seditious conspiracy trial of five members of the right-wing Oath Keepers organization charged in connection with the Jan. 6 attack on the U.S. Capitol.

Oath Keepers founder Stewart Rhodes was on trial alongside Jessica Watkins, Kelly Meggs, Kenneth Harrelson and Thomas Caldwell; Caldwell was the only one of the five who was not detained while awaiting trial. All five defendants faced felony counts of seditious conspiracy, conspiracy to obstruct an official proceeding, obstruction of an official proceeding and aiding and abetting, and conspiracy to prevent an officer from discharging their duties. Watkins also faced a count of civil disorder and aiding and abetting because, as she admitted on the stand, she helped push against officers inside the Capitol.

The seditious conspiracy case is the most serious to grow out of the Justice Department’s sprawling investigation into the U.S. Capitol attack, and the trial lasted for nearly two months. Opening statements in the trial began Oct. 3, and the jury started deliberating Nov. 22. Three of the defendants — Rhodes, Caldwell and Watkins — took the stand in their own defense, with Rhodes telling jurors it was “stupid” for Oath Keepers to go inside the Capitol.

Federal prosecutors alleged that the five defendants conspired to oppose the peaceful transfer of power from former President Donald Trump to President Joe Biden, but did not prove that there was a pre-coordinated plot to actually storm the U.S. Capitol. Instead, federal prosecutors alleged that those who entered the building — Meggs, Watkins and Harrelson — seized the opportunity when other rioters broke into the Capitol. One federal prosecutor told jurors that a “sense of entitlement” had driven the Oath Keepers to storm the building, while another argued that the defendants “took matters out of the hands of the people, and put rifles into their own hands.”

Members of the Oath Keepers organized a “quick reaction force” at a hotel in Virginia, which one prosecution witness testified contained the most weapons he’d seen in one place since his military days. Caldwell stayed at the “QRF” hotel and met with Oath Keepers near Trump’s speech in Washington on Jan. 6 before going to the Capitol with his wife, where they went to the top of the inauguration platform set up on the west side of the Capitol.

Another Oath Keeper who pleaded guilty to a non-seditious conspiracy charge gave prosecutors some of their strongest testimony during the trial, telling jurors that he was prepared to die to keep Trump in office. Jason Dolan testified that he was ready to “conquer or die” and potentially “take up arms” to fight on Trump’s behalf.

Another Oath Keeper who cooperated with the government, Graydon Young, testified that he thought he was part of a “Bastille-type moment,” referring to the storming of the fortress and political prison in Paris during the French Revolution era, in 1789.

“I guess I was acting like a traitor against my own government,” Young testified.

While three other Oath Keepers pleaded guilty to seditious conspiracy, none of them testified during the trial.

The trial featured extensive Signal messages exchanged by members of the alleged conspiracy, along with substantial audio of Rhodes both before and after the Jan. 6 attack. In a conference call in November 2020, which was recorded by at least one member, Rhodes said that those who opposed Biden were on the same path as the Founding Fathers were before the American Revolution.

“You’ve got to make sure [Trump] knows that you are willing to die to fight for this country,” Rhodes told the Oath Keepers on the call. “We’re very much in exactly the same spot that the Founding Fathers were in like March 1775. … Nothing left but to fight. … We’re not getting out of this without a fight. There’s going to be a fight. But let’s just do it smart and let’s do it while President Trump is still commander in chief and let’s try to get him to do his duty and step up and do it.”

Prosecutors also played audio of Rhodes continuing to plot to oppose the government after the Jan. 6 attack.

“We should have brought rifles. We could have fixed it right then and there,” Rhodes said in a Jan. 10, 2021, meeting with a man who he believed would be able to pass along a message to Trump. “I’d hang f—in’ Pelosi from the lamppost.”

The trial also featured testimony from Michael Greene, aka “Whip,” who waived his Fifth Amendment right in order to testify on Rhodes’ behalf. Greene, a military veteran who worked for the company formerly known as Blackwater, testified that the Oath Keepers were on a security mission and that he didn’t take Rhodes’ talk about civil war seriously.

“It’s nothing different from an old guy at the barber shop talking about there’s a fight coming,” Greene said.

When pressed by a federal prosecutor about whether old guys at the barber shop stormed the Capitol, Greene noted there were a lot of old people at the Capitol on Jan. 6 and that he’s been indicted alongside two other older men. “They’re old as s—,” Greene said of his alleged co-conspirators.

The Justice Department has charged about 900 people in connection with the Capitol attack and is asking Congress for more resources for the investigation. Hundreds of additional cases are in the works.

Ryan J. Reilly is a justice reporter for NBC News.

Daniel Barnes reports for NBC News, based in Washington.