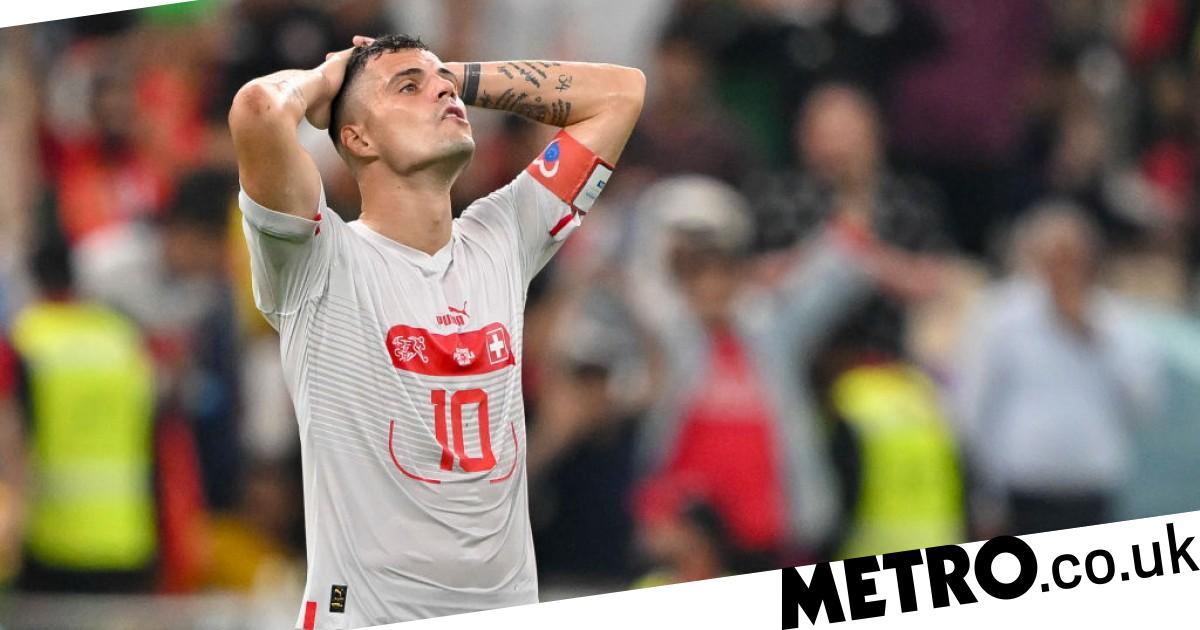 Having reached the knockout stages in a thrilling group finale against Serbia last week, the Swiss crashed out of the competition after a a 6-1 thrashing to Portugal.

Journalists from Swiss French-language newspaper Le Matin approached the skipper in the mixed zone at full-time at the Lusail Stadium, tactfully asking if he had two minutes to speak to them after the gut-wrenching defeat.

Satisfied with the questions, however, the Gunners star added: ‘A lot of things didn’t work. There is no explanation. We prepared well and we were convinced that we could cause problems in Portugal. Unfortunately, we were unable to do so. It hurts.’

‘At this level, in the round of 16 of the World Cup, we have no right, it must not happen. It happened. We’re going back home.’

Xhaka is now set to immediately fly out to Dubai where he will join up with his Arsenal teammates for their training camp.

Arsenal, top of the Premier League after their thrilling start to the season, resume their campaign against West Ham on Boxing Day.

Mikel Areta’s side take on Lyon, AC Milan and Juventus in friendly matches on 8 December, 13 December and 17 December before then.

The Gunners are reeling from news that Gabriel Jesus is set for a spell on the sidelines having undergone knee surgery which could sideline him for three months.

‘It’s a shame because you saw in the first round of the Premier League how important he is for us,’ Xhaka said of his injured teammate. ‘I don’t know how big the injury is, maybe two or three months, I think.

‘But he is a strong guy. It’s a small injury for him I think, and we will support him. He knows that we are behind him and hopefully we can get him back as quick as possible.’


MORE : ‘I would be angry too’ – Bruno Fernandes reveals Cristiano Ronaldo’s reaction to being dropped by Portugal