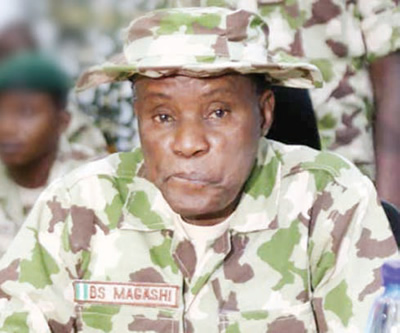 The Minister in a statement on Wednesday by his media aide, Mohammad Abdulkadri, said this at a meeting with the delegation of the experts of the United Nations Independent High-Level Panel on Security, Governance and Development in the Sahel.

He, however, appealed to the United Nations to support Nigeria with funds to enable it curb the insecurity confronting the nation.

The statement partly read, “The Minister of Defence tasked the United Nations on improved funding to end insecurity.

“He also appealed to the United Nations to support the overall good performance of the Nigerian Military to completely end insecurity in parts of the country.  The minister advocated for a new border security template to minimise cross-border crimes.

“He stated proudly that Nigeria is doing pretty well under the watch of the Commander in Chief of the Nigerian Armed Forces, President Muhammadu Buhari in curtailing the effrontery and the audacity of the terrorists, especially in the northeastern part of the country.

“The minister noted that Nigeria is contributing more than other cooperating states in counterpart funding, deployment of manpower, and provision of other logistics in the Multinational Joint Task Force.

“He, however, made a serious case for improved resources on the part of the United Nations towards the promotion of global peace and regional economic prosperity to reduce the high level of poverty at all levels. “