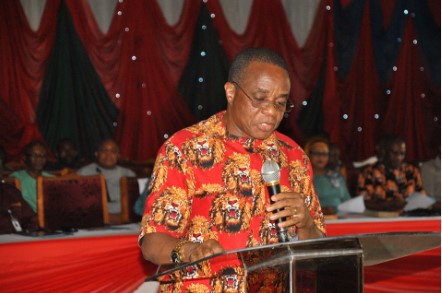 Atiku, who described Ikonne as an erudite scholar of repute with vast experience in administration, said his contributions in advancing knowledge within the academic community would be appreciated by generations unborn.

Ikonne was until his death an optometrist by profession and had served Abia State in several capacities including as the rector of Abia State Polytechnic, Aba and as the vice chancellor of the state-owned university, Abia State University Uturu.

The PDP governorship hopeful died after a brief illness on Wednesday as announced by his son, Dr. Chikezie Uche-Ikonne, in a statement.

Atiku said the late Ikonne was ever smiling and would be greatly missed.

He recalled that his last encounter with the Prof was Ikonne led a delegation of Abia PDP stakeholders to his residence in Abuja.

“He (Pro Ikonne) was at his intellectual best in the robust discussions that I had with his delegation. We shall miss his ever smiling face, wit and sense of humor which stood him out at all times,” the former vice president said.

Atiku further noted that “as a strong member of the PDP, who should have led PDP to victory in the forthcoming general elections in Abia State, his death comes as a rude shock.”

The PDP presidential candidate expressed his deepest condolences to Ikonne’s immediate family, all PDP members in Abia State, the government and good people of Abia State.