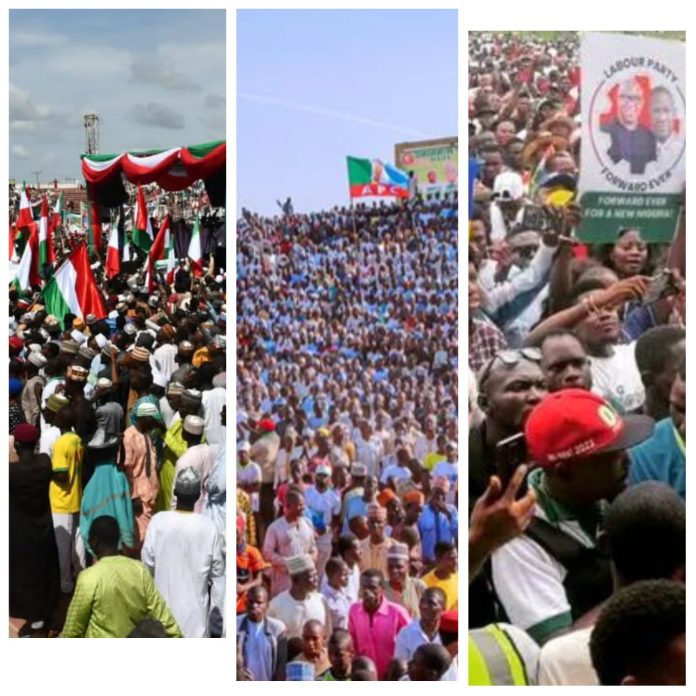 With the 2023 general election around the corner, the leading political parties continue to lay claim to dominance across the country.

The ruling All Progressives Congress, APC, the Peoples Democratic Party, PDP, and the Labour Party, LP, are all claiming to be in firm control of the voters going by the mammoth crowd at their rallies.

Newspot reports that the ongoing presidential campaign rallies in different cities of the country have been witnessing a massive turn out of crowd for the leading political parties- the APC, PDP, Labour Party and in some cases, the New Nigerian Peoples Party, NNPP.

After every rally, especially the most successful ones, politicians and their followers have had a reason to boast, sharing intimidating video clips and pictures online and this has raised the question on whether the rallies meant acceptability of the political party or the politician in question.

Newspot had earlier sought the opinions of Nigerians concerning this and while some people feel the crowd is rented by politicians and their handlers to parade as members of their political parties and supporters, others think there are also genuine crowds.

Even before the Independent National Electoral Commission, INEC, declared open the campaign season, some Nigerians had started marching across the cities to register support for their candidates.

He said that Tinubu and Shettima have not only won the State but have also captured the North West and won the 2023 presidential election.

Also speaking to Newspot on this subject matter, Comrade Okpokwu Ogenyi, Convener, Concerned APC Members and member APC Presidential Campaign Council and Civil Society Directorate, said, “If you are able to mobilise crowd to attend your rally, you will be able to mobilise them to vote for you.

“All the places the APC has gone for their rallies, you’ll see the party has been well received except in Enugu, where some people carrying the APC flag later said they were just there to collect money. Bola Tinubu has gathered the largest crowd in most places and this simply means victory.

“The difference between the mammoth crowd you see in the rallies of the APC, PDP, the Labour Party and the NNPP is that the crowd in the APC are people with their PVCs and ready to cast their votes, while those at the rallies of the other parties are just there without their PVCs.

“I’m not saying the crowd you see in rallies of other parties are not genuine but do they have their PVC? Go to the streets and when you ask the people who they’re supporting, also ask them about their PVCs, then you’ll agree with me that APC is in the lead.”

“Now, the turnout first symbolises acceptability and if this acceptability is transformed into voting, of course, you know what the outcome would be.

“But I’ve never had a doubt that after the next presidential election, Atiku will be the next President because Nigerians are disenchanted and that’s why you see this mammoth crowd that comes out for Atiku.

“And I can tell you that those who are more disenchanted are seated at home. They don’t even have the energy to come out because there’s no food to eat. So I can tell that the crowd you see there is just the tip of the iceberg.

“Anytime Atiku goes out, the crowd is just a tip of the iceberg to what is happening underground. Atiku is the one with the highest crowd so far. There is video, pictural and even drone evidence to prove it.

“Other people focus on the stage, while we focus on the crowd. Some people are even reducing the sizes of stadiums and using canopies so that the crowd would look intimidating.