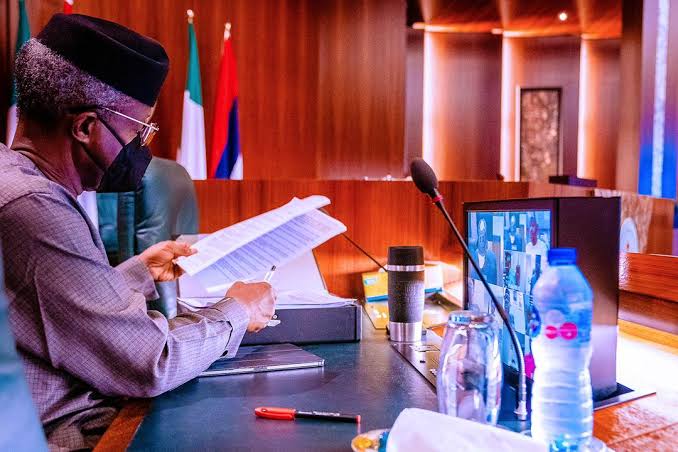 The Vice President, Prof. Yemi Osinbajo has  chaired the meeting of the Federal Executive Council (FEC) held at the Presidential Villa just as the APC Presidential campaign trail makes a stop in Abeokuta, Ogun State.

It would be recalled that President Buhari had directed the VP, the SGF and other cabinet ministers to focus on governance while he (the President) joins the party’s Presidential campaign trial across the country.

The President is scheduled to join the campaign team in 10 States and has already been to four of the locations – Plateau, Bauchi, Adamawa and Yobe.

Official photos released from the State House photo unit showed Prof. Osinbajo chairing the weekly FEC meeting in the absence of the President who is away in Senegal for an official engagement and is not expected back in Abuja for a few days.

President Buhari departed Lagos for Dakar, the Senegalese capital on Tuesday to attend the second edition of the Dakar International Conference on Agriculture starting today.

Contrary to speculations in some quarters that the VP was avoiding the APC campaigns, he (the VP) is focused on governance as observed in the proceedings of the FEC meetings today.