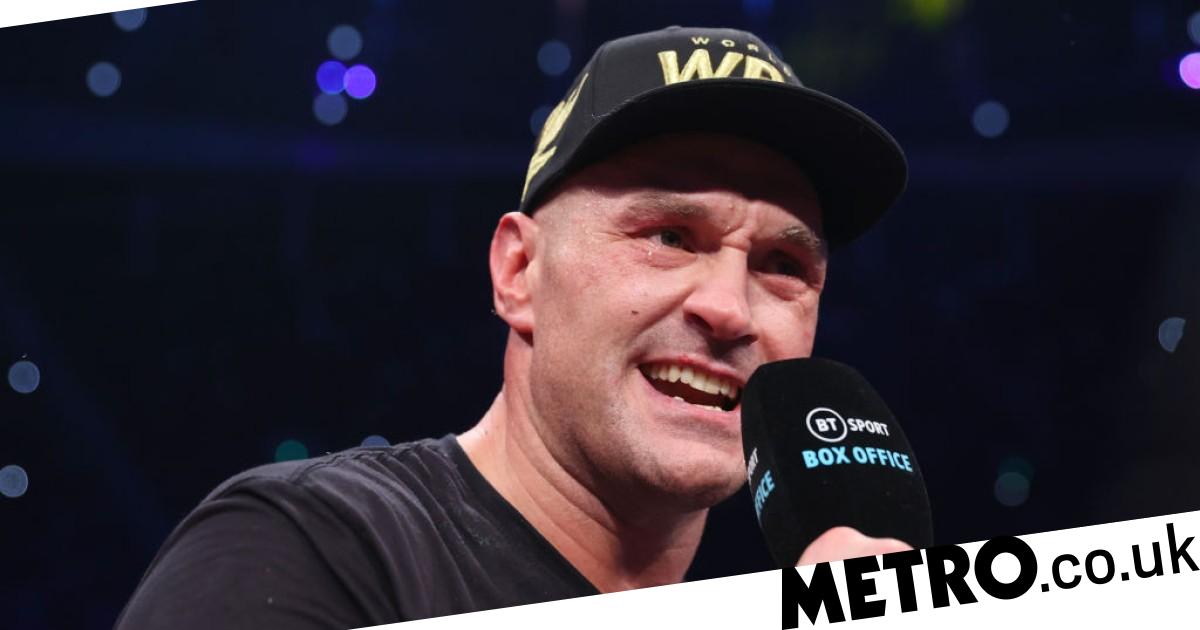 Tyson Fury has told Anthony Joshua it should have been him in the ring tonight after his dominant victory over Derek Chisora.

Talks for Fury vs Joshua resumed in the autumn after ‘The Gypsy King’ offered his rival a shot at his WBC heavyweight title off the back of his summer defeat to Oleksandr Usyk.

The Battle of Britain once again fell through with Chisora instead agreeing to fight Fury.

Having already beaten the Londoner twice in 2011 and 2014, the undefeated champion handed out a brutal beating to his old rival on Saturday night, dominating the contest before the referee thankfully waved it off in the 10th round with Chisora beaten and bloodied.

Fury praised Chisora’s resilience after their contest, while aiming another dig at Joshua with a meeting with the Olympian not currently in his plans.

With an undisputed clash against IBF, WBO and WBA champion Usyk his top priority, Fury was asked if his plans include Joshua.

Fury told IFL TV: ‘The man is a sausage. He should have been in here tonight but he had poor old Derek take a good old hiding in again, stepping in his boots. It is what it is. Usyk or Joyce next.’

Talks between the Fury an Usyk camps are already well underway with the fight to crown the heavyweight division’s first undisputed champion since Lennox Lewis initially slated for March 2023.

But that showdown could be delayed with Fury revealing he is likely to undergo elbow surgery.

‘I’ve got to maybe have surgery on my right elbow,’ Fury told ESPN. ‘I had the left one done, so I’ve got to have it done. It will take about six-to-eight weeks to heal. We’ll see when we can be ready for this fight.’

Usyk was ringside to watch Fury’s victory over Chisora with the two sharing an intense stare down post-fight. Fury hurled abuse at his rival, who stood in silence as he grinned back.

‘You 15 stone little midget who beat a body builder [Anthony Joshua], well I ain’t a body builder, sucker,’ Fury bellowed into the microphone in front of his unflinching rival.

‘I’m going to write you off. I already did one Ukrainian in [Wladimir] Klitschko and I’ll do you as well gappy teeth. You ugly little man, let’s get it on.’