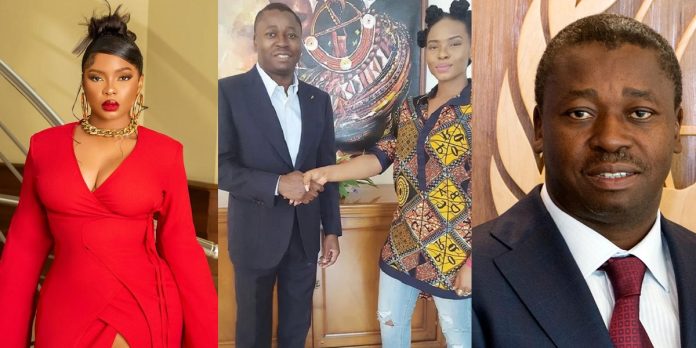 Popular Nigerian singer, Yemi Alade has finally broken her silence on reports that she’s pregnant and expecting a child with the president of Togo, Faure Essozimna Gnassingbé Eyadéma.

Social media got buzzing during the week after some blogs reported that “Mama Africa” and the Togo president have allegedly been in a romantic relationship for a while. According to the blogger who started the rumors, the pair have been dating since 2017.

It was also claimed that Yemi is currently pregnant for President Eyadema and that he intends to make her his sixth wife.

However, in an apparent reaction to the rumour Yemi Alade took to Twitter to post laughing and pregnant emojis. In a subsequent tweet, she wrote, “The ment is different this Jan. If you no like your job, abeg pretend small when you see costumers na. This January people dey really Ment”. In other news, popular Nollywood actor, Deyemi Okanlawon has called out Nigerian politicians for hiding under the lie that their wealth was equivalent to hard work.

Taking to the microblogging platform, Twitter, the actor known for always speaking his truth, stated that individuals were entitled to their lifestyle, consequences, and decisions as long as they did not pretend.

According to him, there was no point pretending and lying about their source of income and deceiving hardworking youths.

“Anyone man/woman is entitled to: 1 Whatever life they choose 2 Whatever decisions they make 3 Consequences of the above if any. Just try not to pretend your hard work is the source of your money/lifestyle & cause confusion & despair in the lives of our hustling younger ones! This public service announcement is for Nigerian politicians and anyone else concerned as well”.