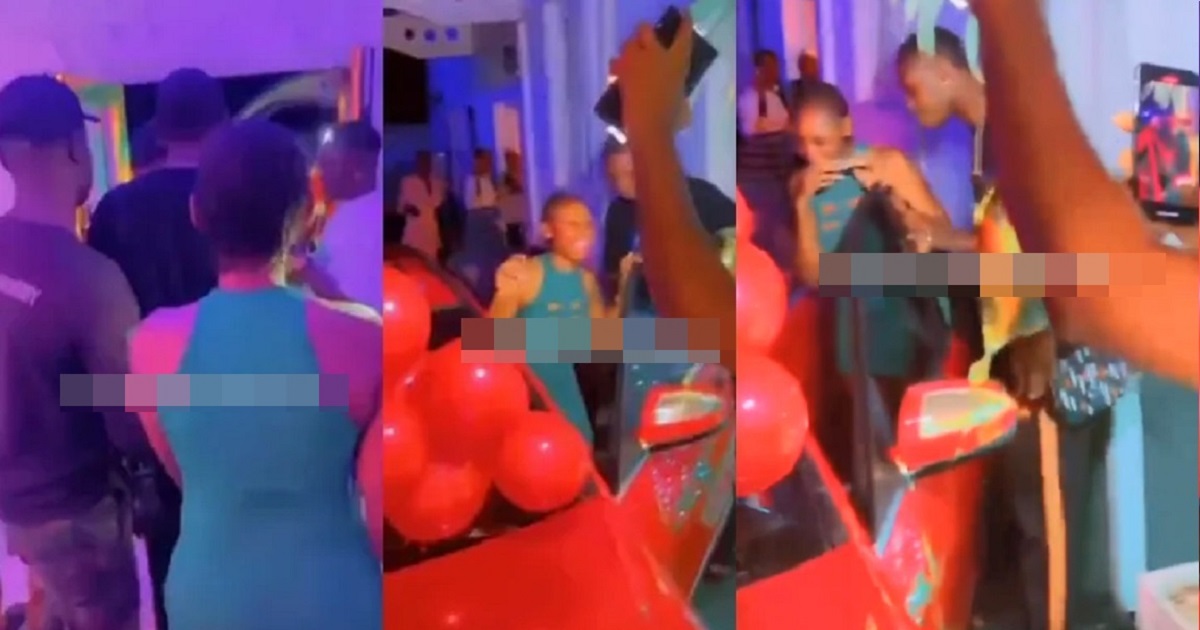 A Nigerian man has raised the bar by gifting his girlfriend a brand-new Mercedes Benz for Christmas.

He organized a surprise party and unveiled the suprise car gift with some of their close friends in attendance.

The young lady was visibly shocked and excited as he led her to where the car was parked.

As the girl got into the leather seat of the Benz to formally launch it, friends could be seen praising and applauding the couple.

The video was tagged with the caption; ”December gift came early”.

In related news, A businessman has gifted his employee who worked with him for seventeen years a Mercedes Benz for his loyalty and dedication.

The businessman with Twitter handle @lionofjada took to the microblogging platform to share photos of his employee, whose name he gave as Rowland, posing with his new whip.

He said Rowland stood by him through thick and thin and remained loyal to him throughout his seventeen years of service.

To appreciate him for his loyalty, he decided to buy him a Mercedes Benz to support his next career goal of becoming a driver with a ride-hailing app.
Jada wrote,

“Rowland (Latino) has served me since 2005 and has been the perfect friend, brother and member of staff. Through my darkest days he was always a loyal constant. He bore shame and pain to stand with me. Now he wants to ‘do Uber’

And it’s a Benz he went to point at. I don’t know if he really wants to do business or impress Abuja babes but, either way, he deserves it. Latino met me when I was Director for Igala Movies Association back in ’05’. Through the years, senior people would make mockery of my friendship with him. “Why you go dey carry small boy waka as your friend?”
I always said, “I’d rather a small boy I can trust than big boys who feel insecure.”

When things turned back, Latino never left. He stayed. When others walked out on me, he was steadfast.

He holds a degree in theater arts. He’s done his masters too. Same theater arts. He is a reay chilled guy and can vibe with any kind of person. There is no project I have been involved in since 2005 that he’s not been part of. Once he registers his car now, book rides with him o.”

“I feel like this is just the beginning” – Singer, Tems speaks on her Grammy win

Emotional moment actress, Uche Ogbodo broke down in tears while her father prayed for her at her wedding (Video)

“Take care of your wife in the presence of your children...

“Take care of your wife in the presence of your children...