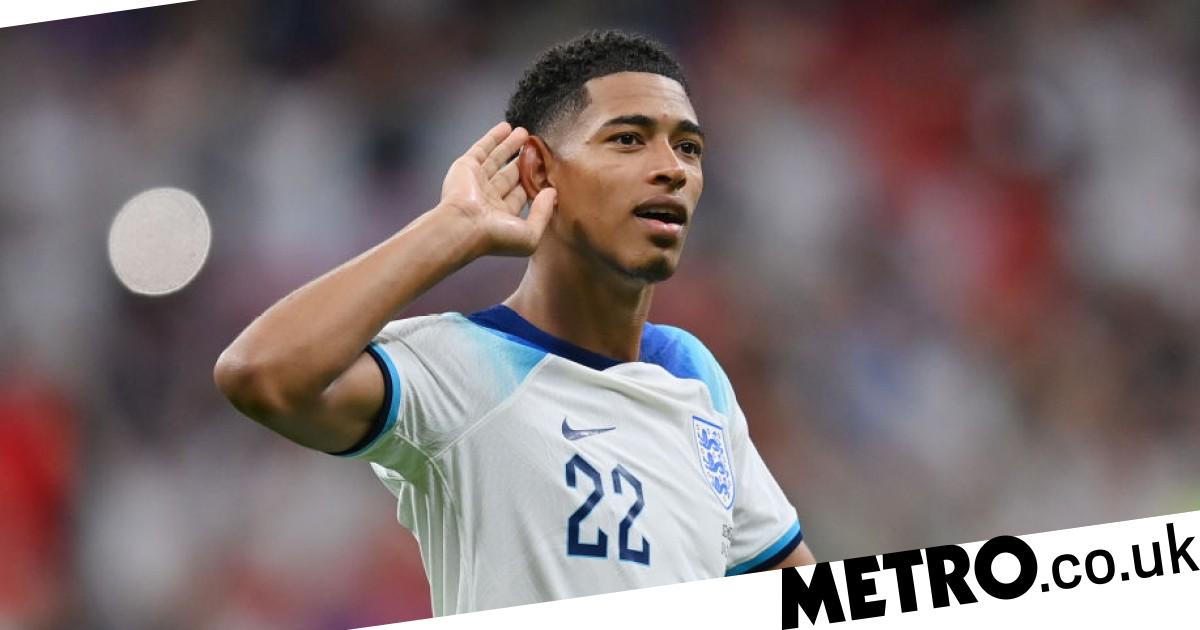 This World Cup has produced many things so far but has it unearthed a talent more exciting than England’s Jude Bellingham?

No Marcus Rashford, no Raheem Sterling – no problem. Because when you have a unique talent like this, the sky is the limit and right now England are looking up at the stars.

Rashford was, rather surprisingly, left on the bench in favour of Bukayo Saka despite his brace against Wales, while Sterling was unavailable because of a family matter. No problem. Jude’s here.

The 19-year-old pulled the strings superbly from midfield as the Three Lions strode into the World Cup quarter-finals with a 3-0 victory over Senegal at Al Bayt Stadium.

The spectacular was reserved for Borussia Dortmund midfielder Bellingham, who instigated the first two goals and hardly put a foot wrong in 76 brilliant minutes.

If Qatar is his coming-of-age tournament, last night was his breakout performance.

He broke up play, passed to team-mates with ease and caused nothing but frustration to the Senegal players chasing him in vain.

He makes it all look so easy and 38 minutes in, with England under the cosh during Senegal’s best spell of the first half and the atmosphere beginning to turn slightly after a bright start, Bellingham broke away down the left before cutting the ball back, inch-perfect for Jordan Henderson to confidently sweep home and put his side ahead.

Bellingham made sure Gareth Southgate’s team went into the break with a two-goal cushion in the third minute of injury time, bursting forward from the middle of the park, finding Phil Foden ahead of him to his left, and he in turn picked out Harry Kane.

The skipper gladly drilled his first goal of the tournament past Edouard Mendy.

All masterminded by Bellingham. Remember, he is a player who did not even come into the World Cup as a guaranteed starter.

Suddenly, a decidedly shaky first-half period, during which John Stones survived a VAR check for handball and Ismaila Sarr scooped Senegal’s best chance over the crossbar, was a memory. Bellingham had taken over.

The Senegalese fans in the 65,985 crowd carried on drumming, as they had all evening, creating an intense atmosphere, but their team were on mute without the injured Sadio Mane and suspended Idrissa Gueye. Senegal boss Aliou Cisse made a trio of substitutions at half-time but the punishment kept coming and the African champions found themselves three goals behind in the 57th minute.

Foden rode the challenge of Youssouf Sabaly and crossed low from the left for the waiting Saka to dink a neat finish over Mendy. Game over.

Southgate was able to give run-outs to Rashford, Jack Grealish, Mason Mount, Eric Dier and Kalvin Phillips as his men saw out a comfortable passage into the last eight, where they will take on reigning champions France on Saturday.

Southgate again proved the manager for the big call – no one is questioning his decision to leave out Rashford now.

France await but if England are to go deep in the World Cup, or even win it, Bellingham looks like being the key. Hey Jude, can you do it all again on Saturday please?

Superb early save kept it scoreless when a Senegal goal could have made all the difference. 7/10

Steady and generally dependable, the best right-back in the squad. Tougher tests await. 6/10

Some sloppy passes caused problems early on but another clean sheet. 7/10

Also had moments of uncertainty. Will need to be sharper against Kylian Mbappe and co. 7/10

Always available and capable of putting in dangerous crosses. 7/10

Mature well beyond his teenage years, played a crucial role in two goals. A superstar in the making. 9/10

A strong, surging run – typical of his display – and an excellent finish put the Three Lions ahead. 8/10

On his heels for Kane’s early cross but perfectly placed to sweep in the third goal – his third in Qatar. 8/10

A tireless worker, put in a lovely cross which just eluded Saka and finally opened his tournament account with a typically clinical finish. 8/10

Played a part in all three goals with a lovely flick for the first, an unselfish pass for the second and a superb run and cross for the third. 9/10

Marcus Rashford (6): Unfortunate not to start, not much chance to get into the game.

Jack Grealish (7): Inches away from scoring.

Eric Dier (6): Introduced to give Stones a breather.


MORE : Harry Kane proves he is England’s man for the big occasion yet again