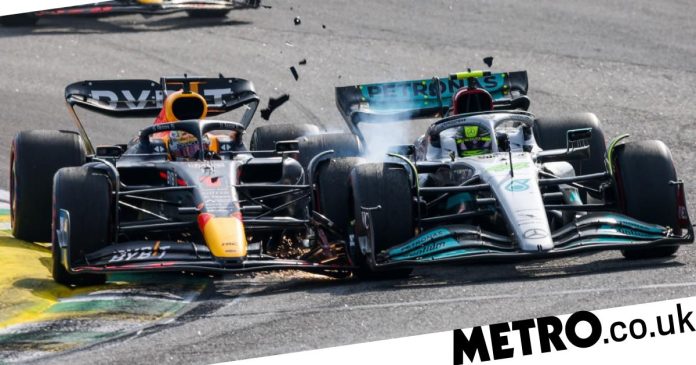 Sir Lewis Hamilton says that he has no problem with rival Max Verstappen as the new Formula One season edges closer.

The seven-time world champion has shared many great rivalries throughout his career with the likes of Fernando Alonso, Sebastian Vettel and Nico Rosberg, but none quite like with Verstappen.

The Mercedes and Red Bull drivers went wheel-to-wheel for the 2021 title, going into the season finale at Abu Dhabi level on points, with the Dutchman prevailing in infamous circumstances.

That season as a whole was packed with controversial incidents including collisions between the pair at the British, Italian and Saudi Arabian grand prix.

In 2022, the huge gap in pace between the Mercedes W13 and the Red Bull RB18 meant that pair had few opportunities to directly race each other as Verstappen cruised to the title, but nevertheless they still managed to come to blows in Brazil.

After that encounter, Hamilton remarked: ‘You know how it is with Max’, later adding that he: ‘Wouldn’t hold your breath,’ waiting for a clean fight with the 25-year-old.

All of this has lead to speculation that the two can’t stand each other, but the British sporting hero has now claimed that this isn’t true at all, remarking that he has nothing but respect for the reigning champion.

‘People like to talk about there being problems between Max and me,’ the 38-year-old told Formula 1 Magazine.

‘[That’s all just] fairytales. I respect him.

‘He did everything he had to do in 2021, so why should I have a problem with him. He performed and delivered every weekend, nobody can take that away from him.

‘He is a lot younger, so maybe he has a problem with me. But I am not sure about that and I actually assume not. Although I can’t speak for him.’

Verstappen has naturally been asked about the rivalry before, telling the Daily Mail last year: ‘I was always taught that you have to respect what people have achieved in sport.

‘I have no problem with what Lewis has achieved. He is one of the best ever.

‘I know it is not only the car he has been driving. That helps. We all know that, but you still have to beat your team-mate and Lewis has done that consistently.’

Both Hamilton and Verstappen will be aiming to add another title to their collection this year, with the season set to get underway on March 5th in Bahrain.

In the meantime, they can look forward to the 2023 car launches next month with Red Bull and Mercedes set to unveil their new machines on February 3rd and February 15th respectively.


MORE : Formula 1 confirm 2023 calendar and announce Chinese Grand Prix will not be replaced