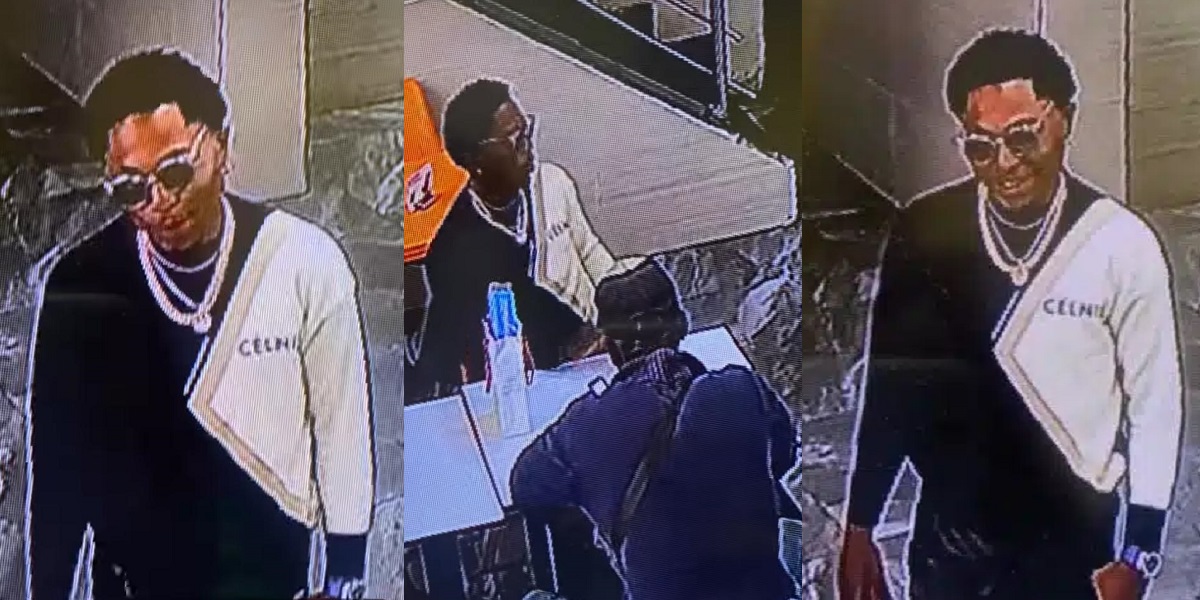 A Nigerian businesswoman has narrated how a man stole a piece of jewelry worth N920,000 from a dispatch rider she sent to deliver the item.

The jeweler, identified as Hollyghost Nicki, took to her Instagram page to call out the alleged thief and shared a CCTV footage that captures the whole incident.

According to her, the young man ordered for a Moissanite diamond necklace and pendant,  and requested for payment on delivery which is against her company policy, but she obliged and sent a dispatch rider to deliver the jewelry.

However, the young man played a smart move on the dispatch rider and absconded with the jewelry which costs N920k. Following the unpleasant experience, the vendor vowed not to do payment on delivery again.

Read her full narration below,

I received a WhatsApp message from this person named “Ola Nelson”.
He said he wanted to purchase a moissanite diamond necklace and pendant. And proceeded to select from the available options. After negotiations he agreed to pay 920k for the selected goods but insisted on payment on delivery.
Usually this mode of payment is not acceptable but due to the way our conversation went I agreed and sent one of my dispatch riders to handle the delivery.

The rider set off and soon got to Lekki to make the delivery, he called Ola to confirm his location which was suppose to be an office address but he was redirected to meet up with him at The Place restaurant along admiralty way, Lekki. The rider thought this was suspicious but followed through as it’s not uncommon for customers to change delivery address.
It was at this new address the “Ola Genius” managed to scam my rider and made away with the jewelries without paying for it.

HOW DID HE PART AWAY WITH THE JEWERIES?

He asked the Rider to unbox the package so that he could test the authenticity of the jewelry, which the rider agreed to after this test, Ola was expected to make payment for the goods immediately but instead, he messaged me asking that I confirm the account he was to make payment to.
I confirmed it was the correct account details but at this point I started to get impatient
Next thing, he asked the rider to wear him the jewelry on his neck so that he could check the fitting I guess and the rider “foolishly” did that even after my strict warnings. Few minutes later, the guy told the rider that he had made the transfer, so the rider in turn called me for confirmation which I was yet to confirm. Then the “Ola genius” told my rider he wanted to quickly step out to get something while the jewelry was still on his neck. The rider actually forgot to remove the jewelry from his neck because he believed the Ola genius had intentions of buying it already and so the guy stepped out and never returned and till date, I have not received any payment from him.

When I texted him to notify him that my rider was still waiting for him and I had not received the money he said he did not collect anything and he BLOCKED my number right away.

It was at this point I confirmed that all details he gave to me during the purchase process were fake but I’m yet to get a hold of him.

What a huge Loss of N920,000 In this hard Nigerian economy that is not smiling at all 😭

I have attached the CCTV video I was able to get from the restaurant which revealed that he went away through the back gate of the restaurant and never returned. Also, I attached screenshot of our transactions.

All of these narrations is to let you know clearly what happened and why we DO NOT and WILL NOT accept payment on delivery.”

Watch the video she shared below,