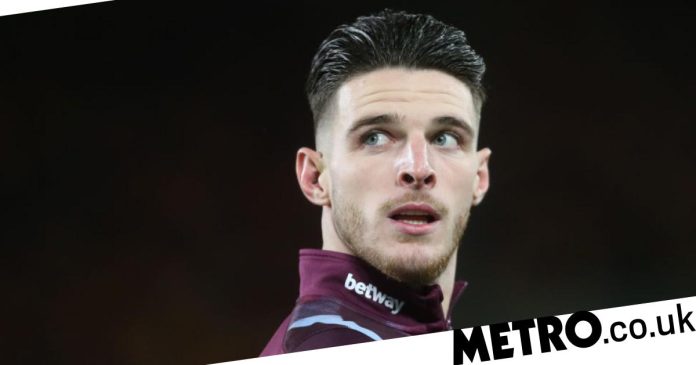 Arteta has guided his side to the top of the Premier League table, five points clear of Manchester City with a game in hand over their closest rival.

In order to keep their title challenge going, Arsenal have dipped into the January transfer market, bringing in attacker Leandro Trossard from Brighton and versatile defender Jakub Kiwior.

But there is already talk of who the Gunners could sign in the summer, with some reports suggesting that they are ready to rival Chelsea for the signature of West Ham and England star Rice.

It is said that Arteta wants to spend a club-record £80million of the defensive midfielder to provide competition and cover for Thomas Partey with the team set for the added challenge of the Champions League next season.

But Lauren hopes that this transfer talk does not distract the manager and the players, telling FairBettingSites: ‘Arsenal have to be focused on the current team they have and not on new potential additions.

‘If there is a good opportunity in the transfer market, then Arsenal will go for it. Look at Eddie Nketiah, we have to deal with what we have in the squad already.

‘Why do we have to believe that Thomas Partey will get injured? He’s doing well, looks strong and we have to focus on the positive things rather than potential issues like an injury to Partey.

‘Mohamed Elneny and Albert Sambi Lokonga will be up to the task if that was to happen. But I don’t want to think of Declan Rice or any new additions.’

Arteta would seem to agree, with recent reports suggesting that he is unwilling to let Lokonga leave on loan, but he will have to make do without Elneny who has picked up a knee injury and could well be out for the rest of the campaign.

Lauren’s example of Nketiah is very valid though, given how he has more than stepped up to the plate since the injury to Gabriel Jesus, negating Arsenal’s need to sign a new striker.

The 23-year-old has six goals in his last six games, including a brace in the 3-2 win against Manchester United last Sunday, a victory that will no doubt prove pivotal if the Gunners win the title.

‘The Arsenal team have been fantastic and they showed a lot of mental strength to come back and played quality football against Manchester United,’ former right-back Lauren added.

‘I’ve said before if Arsenal are able to stay top of the league by the end of January and the beginning of February, then they have a big chance to win the Premier League.’