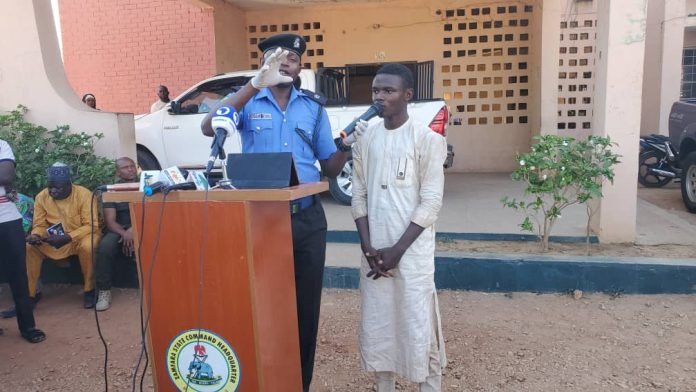 The Zamfara State Police Command has revealed that it has arrested two bandits’ informants with dangerous drugs and other substances suspected to be Indian hemp.

This was contained in a statement signed and issued to newsmen in Gusau, the state capital by the state police spokesman, SP Mohammed Shehu.

He gave the names of the suspects as Murtala Musafrom Kado village in Kaura Namoda Local Government Area from the state, Mustapha Lawala from Kasuwa Daji area of the same local government area.

He identified the third suspect as Sharhabilu Taju from Bela village of Bungudu Local Government Area of the state.

He said, “On the 24th January, 2023 police detectives acted on intelligence reports and arrested the above-mentioned suspects who were both residing in Bela village under Bungudu Local Government Area.

“The suspects before their arrest were part of a criminal syndicate that gave information to bandits and also supplied all forms of dried leaves suspected to be Indian helm and other dangerous drugs.

“Their actions have continued to aggregate attacks, kidnappings and killing of innocent people of Bungudu, Kaura Namoda and Birnin Magaji Local Government Areas by the bandits.”

Speaking further, he said that another criminal element who specializes in criminal conspiracy, kidnappings, cattle rustling and other forms of criminalities including being Informants to bandits.

He gave the name of the suspect as Ali Abdulahi, a 46 year old man from Gubuchi in Kaduna State.

“On 23rd January, 2023, Police Operatives based on an intelligence report arrested the above-mentioned suspect.

“The suspect has been a member of a criminal syndicate that has been operating in Kaduna, Zamfara and other neighbouring states.

“In the course of Police investigation, the suspect confessed that, on several occasions, he and other members of their gang participated in the Kidnapping of an unspecified number of people and collected millions of Naira as ransom from the relations of the victims.

“He also confessed to have rustled an unspecified number of cows and sheep.”

Shehu said that the suspect will be charged to court of competent jurisdiction for prosecution as soon as investigation is completed.

Continuing, the state police spokesman said that the command has also arrested one Gaddafi Abdulahi for attempted culpable homicide in Anka Local Government Area of the state.

According to the statement, two locally fabricated firearms and two cartridges were recovered.

“On 22nd January, 2023, Police detectives acted on a complaint from one Kasimu Abdullahi of Anka, arrested the suspect for criminal conspiracy and attempted culpable homicide against the complainant.

“While investigation was ongoing, the suspect was equally identified by the family members of late Abdullahi Nakwada for allegedly killing their father sometime in 2022.

“The ongoing investigation revealed that the suspect was among the members of the outlawed group known as Yansakai.”