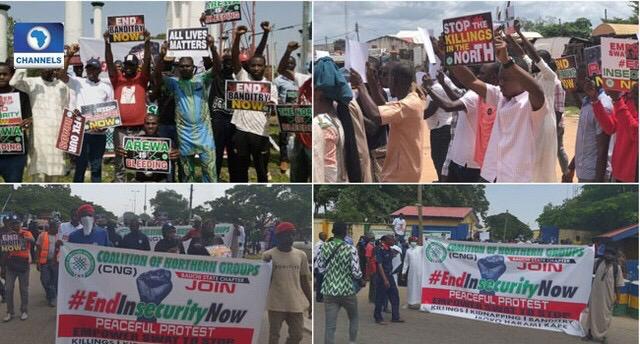 Youths in Bauchi and Niger states under the aegis of Coalition of Northern Groups (CNG) staged a protest on Thursday morning to demand an end to insecurity, poor road infrastructure, and epileptic power supply in the north.

They believe the Special Weapons And Tactics (SWAT) team is in a better position to tackle various forms of security threats such as killings, banditry, kidnapping, rape, and including the terrorist group’ Boko Haram’ in the region if they are fully equipped and trained.

The youths in Niger state also decried the poor condition of road infrastructures in the state, which they describe as death traps .

They urged the Federal government to fix all its roads and address the issue of power supply in the entire northern states.

They explained that the empowerment of the Special Weapons And Tactics (SWAT) unit is a welcome idea but that what is most important is for security to be boosted in the northern region.

They also made stops at the police headquarters and government house to press home their demands.

6 Traits You Need to Develop As A Day TraderBusiness —...

Atiku Sends Message To Obasanjo On His 84th Birthday

How I Now Feel – First Nigerian To Receive COVID-19 Vaccine...