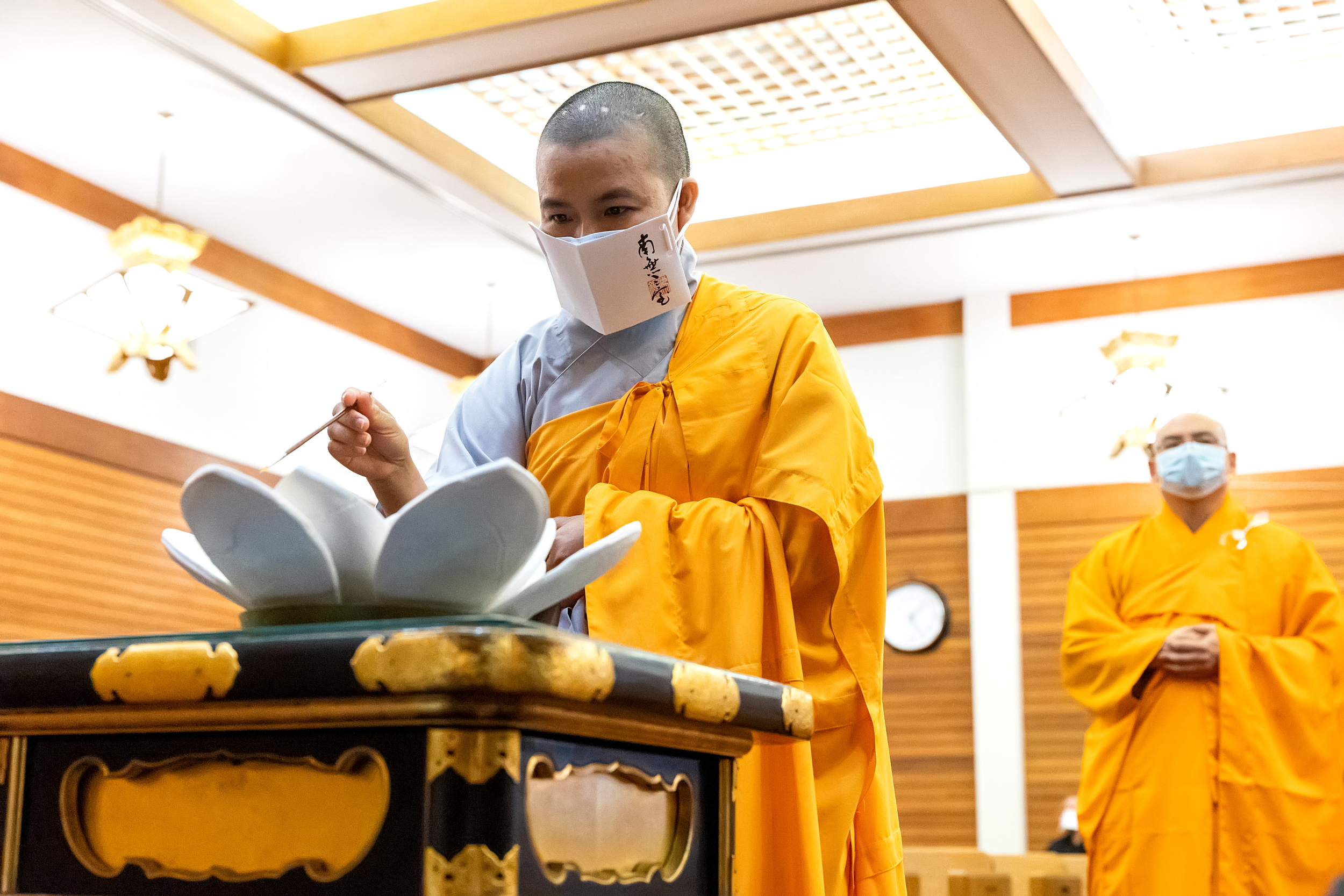 When Mihiri Tillakaratne was young, a white scholar visited the Sri Lankan Buddhist temple she had grown up at. The Los Angeles temple was a vibrant hub for many Sri Lankan Americans scattered across Southern California, but the academic’s fieldwork focused instead on the experiences of white converts — which Tillakaratne would later realize was representative of how Buddhism is often portrayed in the U.S.

“That was really frustrating,” Tillakaratne said. “And I thought, ‘OK, I can do better.’”

So she went to college and studied Pali and Sanskrit — “so I knew exactly what I was chanting,” she said — and then to graduate school, where she’s studying the Sri Lankan American community and filmed a documentary about Sri Lankan youths at her home temple, a group the white scholar had ignored decades earlier. Now, she holds a first-of-its-kind position at Lion’s Roar, the largest Buddhist publication in North America, as one of two editors focused explicitly on covering the Asian American Buddhist community.

She said that through her position, which was created this year, she wants to “dismantle the dominant narrative of what Buddhism is.”

“My big dream,” Tillakaratne said, “is that it’s not just about having this token Asian voice. … It’s about normalizing voices of color in Buddhism in America until we get to the place where, when you open Lion’s Roar or any magazine and you see the pictures of the contributors, of course there are people from all ethnicities and backgrounds and they have equal weight and that we’re no longer thinking about Asian American Buddhists in particular as lesser.”

Asian immigrants brought Buddhism to the U.S. more than 150 years ago, and Asian Americans are now two-thirds of Buddhists in the U.S. But popular depictions of the religion have long centered white voices — from the high-profile conversion of actor Richard Gere to magazine covers such as an issue of Time titled “America’s fascination with Buddhism,” featuring a photograph of Brad Pitt from the movie “Seven Years in Tibet.”

Tellings of the history of Buddhism in the U.S. also center white practitioners; it’s often said to have started with white converts who traveled to Asia and the counterculture movement of the 1960s. When Asian American Buddhists are acknowledged, it’s often to create a binary between the “true” or “pure” Buddhism of white meditation practitioners and the “cultural baggage”or “superstition” of Asian ritual, experts say.

But in the racial reckoning sparked by Black Lives Matter and the murder of George Floyd, growing anti-Asian racism during the pandemic and the coming of age of a younger, more outspoken, generation, Asian American Buddhists like Tillakaratne are challenging the white-dominant narratives of Buddhism and re-centering Asian American identity in what it means to be Buddhist in the U.S.

“How come it’s 2021 and it’s only now that people are centering Asian American Buddhists?” she said.

One reason is the coming of age of Gen Z. As the most racially diverse generation in U.S. history, Gen Zers have often taken a more outspoken stance on racial and social justice — and that also applies to their religious communities, experts say.

Devon Matsumoto, 23, a social worker in the San Francisco Bay Area, grew up going to his Japanese Buddhist temple nearly every day. But when he saw Buddhism depicted in Hollywood or in the news — usually a white person meditating in the mountains, he said — it didn’t match his own life experience. So last year Matsumoto and about a dozen other people created Young Buddhist Editorial, an online forum for Gen Z and millennial Asian American Buddhists to share their own writings and art. The group has also hosted social justice book clubs and virtual workshops about anti-Blackness; curated a “Humans of Buddhism” photo exhibit; gathered stories, poetry and art to commemorate people of Japanese descent incarcerated during World War II; and held a healing circle after the shootings of eight people, including six Asian women, in the Atlanta area in March.

“We’re trying to say: ‘This is how we as an Asian American Buddhist community, this is how we say we want to go, this is how we say we want to be represented,’” said Matsumoto, the group’s president. “We’re not really trying to change the narratives of how people see us — that’d be great, but people are going to see us how they’re going to see us — but how can we mobilize our own community to unite and have a strong ethnic identity as well as a religious identity?”

Pandemic-related anti-Asian racism — which has included temple vandalism — has affected how Asian American Buddhists are speaking out, but it’s not the first time marginalization has been called out, said Funie Hsu, an assistant professor of American studies at San Jose State University. Since the 1990s, Asian Americans have publicly questioned white-centric portrayals of Buddhism, often to great pushback.

“The seeds for these current conversations around Asian American Buddhists and our position in American Buddhism were planted in the 19th century when the first Chinese immigrants came and brought Buddhism,” she said. “They planted these seeds then, and they’ve been slowly growing over the centuries and the decades, and now we’re starting to see many plants starting to sprout.”

More recently, the blog Angry Asian Buddhist — a nod to Phil Yu’s popular Angry Asian Man — was “pivotal” to the conversation, Hsu said. For nearly a decade starting in 2007, the blog documented the erasure of Asian American Buddhists, in part by tallying the number of Asian American bylines in major Buddhist publications, to put a number on the community’s marginalization. A 2010 blog post, for instance, showed that just 21 of 163 authors in “The Best Buddhist Writing,” an annual book put out by editors of the magazine Shambhala Sun — which now goes by the name Lion’s Roar — were of Asian descent.

Asian American Buddhists “are upset at a perceived injustice by predominantly White Buddhists of ignoring Asian Americans, who are the biggest part of Buddhist America,” wrote Aaron Lee, whose last blog entry was in 2016, months before he died at age 34. “They are angry when they hear people write about the history of Buddhism in America without reference to the hundreds of thousands of Buddhist Asian Americans who have been and who continue to be the greatest part of American Buddhism. Who will speak out for them when they’re ignored? Who will stand up to let them know they’re not alone?”

That vision came to life in May, Han said, when a multiethnic, multi-lineage group of Asian American Buddhists gathered in Los Angeles — while thousands of people across the U.S. watched online — to mark the 49th day after the Atlanta-area shootings. One of the victims, Yong Ae Yue, was Buddhist, and to many in the religious tradition, 49 days after death marks a transition point for the deceased.

The ceremony, called May We Gather, also honored other Asian American Buddhists who have been victims of racist violence throughout history, including Sia Bun Ning, who was killed in 1885 during the anti-Chinese Rock Springs Massacre in Wyoming; Kanesaburo Oshima, who was killed in the Fort Sill, Oklahoma, concentration camp in 1942; and Vicha Ratanapakdee, who died after being attacked in his San Francisco neighborhood this year.

Held at the Higashi Hongwanji Temple, which was vandalized in February, the event was the first gathering of Asian American Buddhists, said organizers, who included Han, Hsu and Duncan Ryuken Williams, a Zen priest and professor of religion and East Asian languages and cultures at the University of Southern California.

While the event featured traditional rituals from several Buddhist lineages, the centerpiece was a distinctly Asian American one created by Williams for the occasion: the gilding of a kintsugi lotus. The lotus, a flower that grows in muddy waters, traditionally symbolizes the Buddha’s awakening and the idea that enlightenment comes amid suffering; kintsugi is the Japanese art form of repairing broken ceramics with golden lacquer. With these metaphors, the ritual was meant to show how to transform “brokenness into beauty.”

May We Gather was a first, but for organizers, it also showed a path forward for the community.