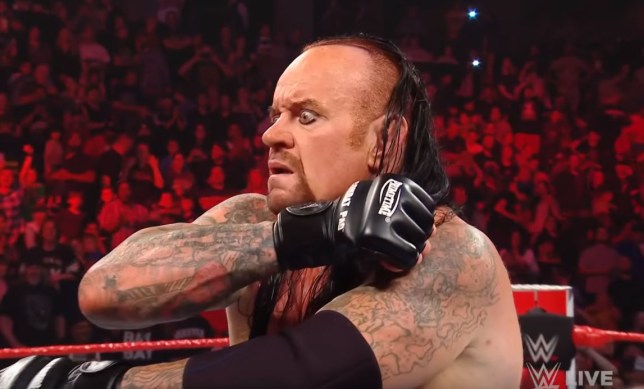 The Undertaker is clearly enjoying his time away from the ring as the WWE legend chopped a brave fan at a recent dinner.

The Dead Man, who reunited with his former Bone Street Krew friend The Godfather over the weekend, gave one fan exactly what he asked for as he slapped his chest and sent him to the floor.

Both ‘Taker – real name Mark Calaway – and the bold bloke seemed to be enjoying their night, and a clip of their brilliant exchange has started doing the rounds on social media after a video on TikTok.

Another man can be seen steadying the legendary wrestler, who smirks and then slaps the man’s chest, sending the fan stumbling into a heap on the floor.

As he got back to his feet, he shared: ‘I survived.’

Based on this evidence, maybe he could still do a job in the ring?

Although the Phenom has given fans a peek into his life away from the ring since ending his wrestling career last year, it can still be strange seeing him away from the camera in normal life.

Perhaps the strangest incident came in 2019 when he popped into the Lothian Road branch of Nando’s in Edinburgh – but that wasn’t even the most bizarre part of the story.

Last year, the restaurant has honoured the memorable visit by sharing a photo of Taker’s iconic hat and coat on the very same table he was pictured at.

The branch’s official Facebook account offered some kind words ahead of his final farewell at Survivor Series 2020, as they wrote: ‘On Friday 13 aka the scariest day of the year, a throwback to when the Undertaker dropped by Nando’s Lothian Road last year…

‘Congratulations on your 30th anniversary. Consider this table permanently reserved…’

It seems WWE’s resident Dead Man is ready to take them up on the offer, as he responded with a suitably cheeky reply and gave fans a hint of his order.

He said: ‘Thank you. I’ll be back when I can. Have 15 wings waiting for me… and make them hotter than hell.’

Meanwhile, fans will get the chance to see him back in character this month as he appears alongside The New Day’s Kofi Kingston, Big E and Xavier Woods in new Netflix interactive movie Escape The Undertaker.


MORE : WWE legends The Undertaker and The Godfather reunite with bottle of whiskey in rare out of character photo