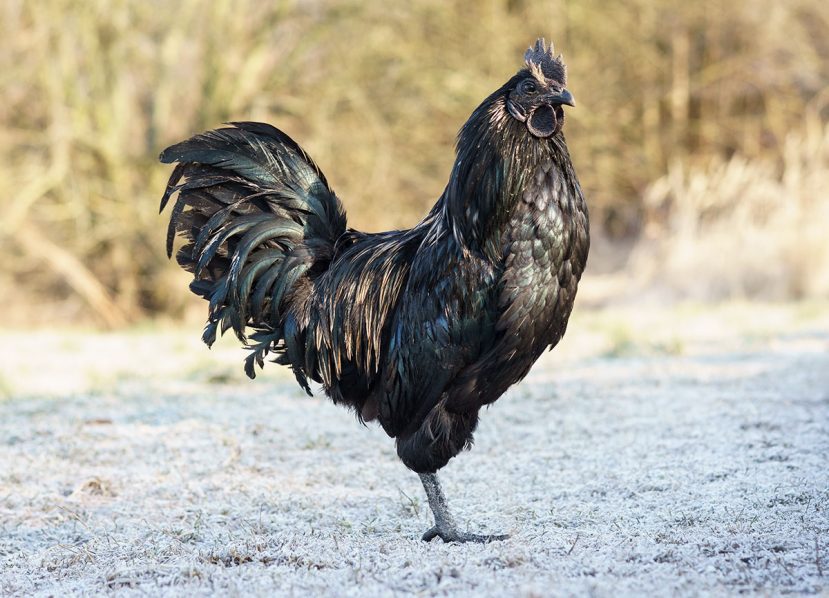 The Ayam Cemani is a unique breed of chicken. It is easily distinguished with its all-black feathers, skin, and meat.

The breed was developed in Indonesia where it is kept by the upper classes of society. It is thought to have magical powers and is quite valuable and sought after in Asian countries. At the current time, they remain a pretty rare bird and are very hard to obtain, reputable US breeders are sold out until 2019.

The Ayam Cemani is often associated with a group of breeds known as Kedu, from the central plains of Java. It is believed to be an offshoot of the Ayam Bekisar chicken which lives on a small group of islands in Indonesia.

They are thought to be the result of crosses between domestic chickens and green jungle fowl. Not all of these crosses will survive, but those that do sometimes have the dark pigmentation of the Ayam Cemani. Their all-black feathers have a beetle-green iridescence in sunlight that is stunning.

Ayam Cemani are black due to excessive pigmentation. This is called fibromelanosis. Fibromelanosis is the result of genetics.

A bird must have two copies of the fibromelanosis gene to be a true Ayam Cemani. Birds that only have one copy will appear darker than birds with no copy of the gene, but they will not be truly all-black according to Earth News.

They are thought of as good luck charms, with the blood and other parts of the bird being used in traditional medicine preparations.

The Ayam Cemani is said to have magical powers and can facilitate communication between the living and the spirit world. As such, it is used as a sacrificial bird to please the gods, its’ flesh is rarely eaten in Indonesia.

The Ayam Cemani is a fairly poor egg layer. On average they will lay around 80 eggs per year which is around 1 egg per week. They do seem to go ‘off lay’ for an extended period of time.

Often, they will lay 20-30 eggs and then stop laying. This can be up to 6 months, and then they will start all over again!

In comparison to the size of the hen, the eggs are quite large and they are cream-coloured with a very slight pink tint, not black according to farminence.