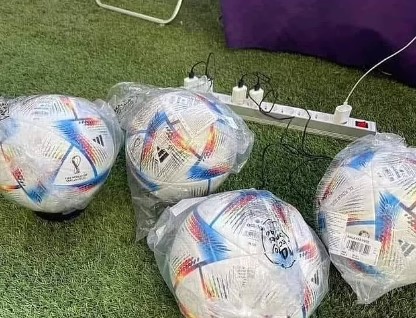 The official ‘Al Rihla’ footballs used for the World Cup in Qatar are so high-tech they don’t just need to be pumped full of air – they need to be charged.

Manufactured by Adidas, the ball, which takes its name from the Arabic word for ‘the journey’, has a sensor inside that measures data like speed and direction and allows for ball-tracking and offside calls by the VAR.

An earlier report by Daily Mail revealed that an incredible photo posted on Reddit showed the fluro-coloured balls being charged, like a smartphone, from a power board before a game.

It’s a long way from the days when people would hunt around for a bicycle pump and then put a bit of oil or butter on an attached small needle to simply put air in a football.

The sensor is powered by a small battery, which Adidas said could last for six hours of active use, or up to 18 days when not.

The sensor, which weighs just 14 grams, gives ball-tracking in real-time; with cameras positioned around the pitch helping referees to determine offside and other questionable decisions, Daily Mail gathered.

“Any time the ball is kicked, headed, thrown or even so much as tapped, the system picks it up at 500 frames per second,” co-founder and managing director of KINEXON, Maximillian Schmidt, who manufactured the sensor, said.

“Data is sent in real time from sensors to a local positioning system, which involves a setup of network antennas installed around the playing field that take in and store the data for immediate use.

“When a ball flies out of bounds during the course of play, and a new ball is thrown or kicked in to replace it, KINEXON’s backend system automatically switches to the new ball’s data input without the need for human intervention,’ said Schmidt, giving fascinating insight into the incredible technology.”

Though machines are not infallible, with many slamming the VAR in the opening game between Qatar and Ecuador for disallowing a goal to Enner Valencia; it’s not just about the data the ball can pull, either.

The Design Director of Football Graphics and Hardwear at Adidas, Franziska Loffelmann, said the ball was also lightning fast.

“The new design allows the ball to maintain a significantly higher speed as it journeys through the air,” he said.

“For the biggest global stage in all of sport, we set out to make the impossible possible with radical innovation by creating the fastest and most accurate FIFA World Cup ball to date.”

That extra speed comes from the fact the ball is made with water-based inks and glues, with dimples on the skin also giving it a much smoother feel; rather than using raised textures like previous balls.

This claim is strongly supported by Uruguay goalkeeper Sergio Rochet, who said the extra speed made his job much tougher.

“Year after year, it gets better for the strikers and for us goalkeepers, it gets very tough … this is a very fast ball,” he told reporters recently.

It’s easily the most high-tech World Cup football ever, though not everyone is a fan.

England star Kieran Trippier appeared to blame the balls for the side’s struggles with set pieces; something that has previously been a strength for the Three Lions.

“Every time I’ve crossed the ball I’ve felt the balls are a bit different but there are no excuses really,” Trippier told reporters.

“I would just say the balls are a bit different, but it is not the heat or anything. I feel it’s a bit lighter. It feels if you put too much power on it it’ll just fly away.”

2023: Datti, the Future and Fulani Advantage. By Bolaji O. Akinyemi.