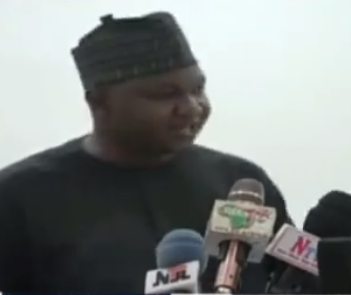 Recall that shortly after the shooting at the Lekki toll plaza occurred on Tuesday October 20 occurred, several foreign governments and celebrities came out to condemn the attack on the protesters.

Hilary Clinton in a tweet posted on her handle, appealed to President Buhari and the Army to stop killing protesters. Her tweet read

Joe Biden on his part asked President Buhari to stop the ongoing violent crackdown on protesters in the country. He said this in a statement he released hours after the shooting at the Lekki tollgate.

“I urge President Buhari and the Nigerian military to cease the violent crackdown on protesters in Nigeria, which has already resulted in several deaths. My heart goes out to all those who have lost a loved one in the violence.

The United States must stand with Nigerians who are peacefully demonstrating for police reform and seeking an end to corruption in their democracy.

Matazu, who is the co-convener of Match 4 Nigeria, however, disagreed with them.  Speaking at a youth forum in Abuja, he called on them to withdraw their ”unguided statements” and always stick to facts in the future.

March 4 Nigeria demands that the United States, United Kingdom, France, Canada, European Union, the United Nation, African Union, International Criminal Court, Amnesty International, Joe Biden, Hilary Clinton, Members of the US congress, members of the UK parliament and foreign celebrities that have reprimanded Nigeria, should withdraw their misguided statement and stick to facts in the future”