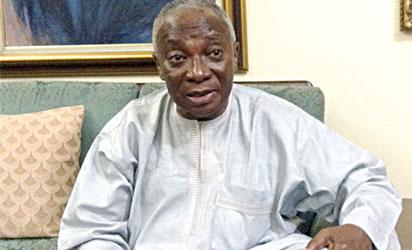 •Why Buhari, others must take pay cut

Yesterday, we published the first part of an engaging interview with Elder statesman, Chief Philip Asiodu. Today, we serve you part of the chat where he spoke on why President Muhammadu Buhari and all elected public officials must take pay cut, how disintegration will worsen Nigeria’s problems and how to make all the states of the country viable.

You said you have hope…

It is a question of leadership. The elders (Burdened Elders) were consulting before COVID-19 stopped our meetings, to find 12 or so younger people from each state who will subscribe to a vision to transform to 1st World status and unite to save the country, not like in 2019 when nine of them were presidential candidates.

They should be united behind one, not more than two. They have the demography numbers even in the voters register. They  should be united for 2023 election and agree to four or five-year plans to transform Nigeria to  1st World status and global significance.

Looking back, seeing our resources, and how we started we should be among the First World countries by now.

It is still possible if we get a leadership of younger people that agrees that there must be a Vision; 2040 or 2050 divided into 4 or 5 year Plans.  The plan has to be respected, and followed, and they should utilize remaining institutional memory as much as possible.

My definition of younger people is 25 to 67 years. When we were planning what

would have become the Fifth National Development  Plan in 1975, the people (India) who helped us set up our Planning Commission  were completing their 11th Five-year Plan. We had abandoned our Fourth  Plan in 1975 and stopped planning.

In those days, we used to consult widely among the ministries and different states.  Look at the Fourth Development Plan, 1970-75, and see the various projects in various states and in all sectors with detailed descriptions, costs, locations, etc.

every year on targets and achievements.

There has been no report since 1975 about what the ministries are doing. So, how  do you monitor? There is no substitute for planning whether you are in the public or private sector.

I was the Chairman of the committee that approved Festac. The built up Festac today is one  quarter of what we approved. It went up to Blackwater Lagoon, and we had planned places for workers and others, and corridors of transportation to take them to Ikeja Industrial Estate. It was Alhaji Lateef Jakande who brought them to Dolphin  Estate. How were you to move  to Ikeja Industrial Estate from Dolphin then?

I was Chairman of the Committee that persuaded late Gen. Yar’Adua when he  was Minister of Transport, and the government to let the RTP of Paris which after surveying  cities of Africa, said Lagos and Cairo were ready, and started planning mass transit  for Lagos and Cairo the same day.

Before then, Konisberger Report of the UN had as far back as in  1964 told us to build monorail mass transit in Lagos from Ikeja to Ebutte-Ero.

They could see where Nigeria was going. However, General Buhari came to power in 1984 and cancelled the Lagos Metro begun by Jakande in 1983.

By the time we settled with Paris Club, it must have become about 3 billion dollars  because it was part of the Paris Club debt.

You can imagine the damage the military had done. Did they do it alone? No. They did it with the support of civilians.

All states are viable agriculturally

With education, planning and good leadership, there is no state that cannot be productive in terms of agricultural resources. Okpara, Awolowo, Sardauna developed the Regions in the First Republic with agricultural produce. We abandoned agriculture, fiscal federalism, plans, planning and prudent management of resources.

We must go back to priority investment in high quality education, infrastructure development especially transportation and communications, and non-discriminatory zero-tolerance fight  against corruption.

On anti-corruption, there are two things that can still be done by the present Government before they go if they would agree. Like we have in advanced democracies,  they should limit the amount of money anybody can contribute to a party in a year, and limit  the amount of money a party can spend on elections and party activities.

If we can get these two done, then the question of submitting yourself to a godfather or selling your properties to raise money for election will stop. If you borrowed money or spent heavily to contest election, your first task after election is to recoup and this fuels corruption.  It also distorts the cost of government procurement and projects.

Then, we have to cut salaries of elected officials, which are too attractive and much beyond our GDP so that we won’t have would-be robbers as leaders.

These are critical issues to be addressed and not just restructuring. Whether you restructure or  not, if the attitude of those going into government is to be on the Forbe’s list of Rich People, even if you turn my street into a state , we will get nowhere.

However, if we are to pursue agro-allied industrialisation, in five years each state will have hundreds of thousands of people paying taxes from income. Once the taxes are not used to pay armies of assistants, special assistants, etc, and phoney civil servants, and going on reckless foreign trips the money would be enough to develop our states.

Disintegration will worsen our crises

It is not surprising to hear otherwise level headed people, given the current challenges, talk as if the breaking up of Nigeria into several parts would be a solution since to them Nigeria is  too difficult to administer. I have no doubt that the solution to our problem does not lie in  disintegration. It is not possible to divide Nigeria neatly into a given number of successor countries. A collapse of the Nigerian State will most likely result in an unpredictable number of mini-states controlled by warlords. Imagine leaving Lagos and encountering a Customs Post in Ikorodu, then Ijebu Ode, then Ofuse, then Benin City, etc. or travelling Northwards,  in Sagamu, then Ibadan, then Ilorin, then Minna and so forth. It will be horrendous to have Nigeria as a failed State.

The fault will be that of the so-called elites. There will be no economic progress and civilization will be halted and life will be very insecure. We would find ourselves in a situation of general anarchy and violence. It is a prospect which should shock us  to exploring solutions to our current problems.

What the ordinary man desires is  shelter, food, educational facilities to ensure his children’s advancement in life and  of course adequate and improving availability of power, health and transportation infrastructure. He is really not interested in the power struggles among politicians.

Good patriotic visionary leadership and good governance which result in rapid economic and  social progress and improving standard of living and quality of life for the great majority of  the people are what will lead to national cohesion and stability.

How remarkable the success of Malaysia in uniting the Malays and Chinese and smaller communities of Indians and others in a multi-religious, multi-ethnic state. Again, China with her 1.4 billion people unites many diverse ethnic and linguistic groups. We also have the Indian example.