Home World News What the lack of tights for Black figure skaters says about the...
Facebook
Twitter
WhatsApp
Telegram
Email 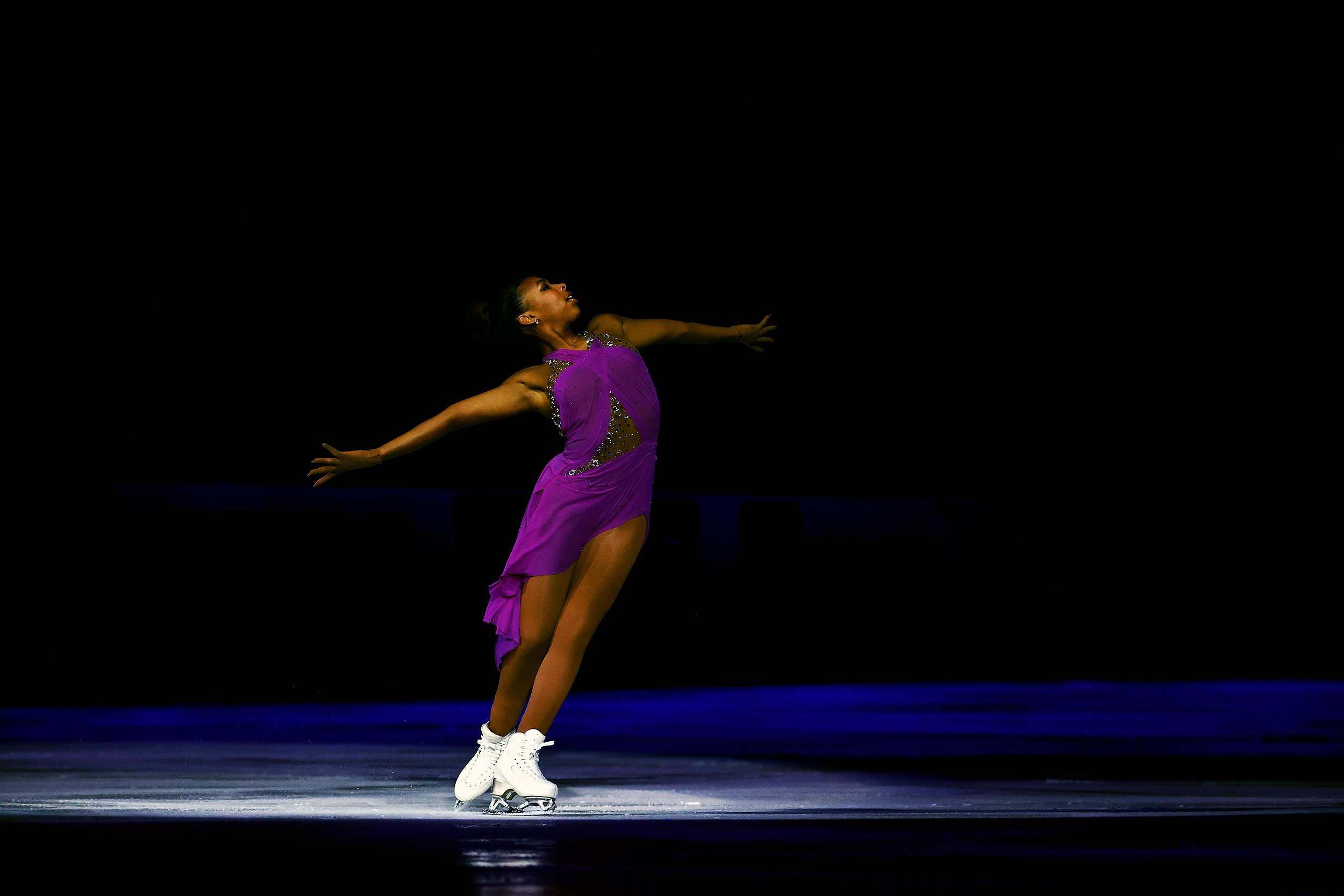 Louisa Warwin’s discovery of figure skating at age 6 propelled her to an accomplished career. She has participated in competitions around the globe and has received numerous accolades, including a medal at the 2020 Reykjavik International Games. But in the midst of her success, the 28-year-old, who is also a violinist, continues to encounter a longstanding issue: finding the right tights to match her skin tone.

Warwin described her experience on TikTok in November, after not having access to tights while participating in a show in Birmingham, England. In the video, Warwin is seen sitting on the floor, visibly upset over her tights that are multiple shades lighter than her skin tone. The brown tights she brought did not fit within the competition’s requirements to fit over the boot, leaving her no choice but to wear the only available option, a lighter-colored pair, which left her uncomfortable.

“I’ve been going through this for over 20 years,” she told NBC News in February.

Having Ghanaian and Nigerian roots, Warwin is the only Black figure skater to qualify for Norway’s national championship. While her life’s passion inspired her to break barriers in a sport with limited diversity, she said the repetitive inability to find suitable tights often caused emotional discomfort and made her feel unwelcome.

“At this point, I was just so frustrated,” Warwin said. “I couldn’t believe that I was going through this again in 2021.”

To figure skaters, tights are no small thing. Besides matching with a skater’s skin tone, flexibility in tights enables a skater’s ease of movement and provides warmth in cold temperatures. But as more Black people slowly enter the sport, they are demanding dignity and recognition equal to their peers in something that may seem negligible to the casual figure skating fan.

During competitions, vendors are present and provide figure skaters with tights that are specific to the competition’s requirements. However, when it comes to Black figure skaters, many vendors throughout Europe don’t carry tights available in darker shades — forcing skaters to bring their own or even dye what is available. While some skaters like Warwin are demanding the field change to be more inclusive, small companies are also emerging to fill the growing need.

What also prompted Warwin, who is a figure skating coach, to post the video in November was one of her students who shared a similar experience.

Unable to find tights in her skin tone, Warwin’s student, who is biracial, informed her that during a competition, one of the judges noted that her tights did not match her skin tone. When Warwin’s student tried to inform a Norwegian skate store about their lack of supply for people of color, its response was that since she was a minority in the sport, there was no need for them to have the tights available in her complexion. While the store offered to order the tights for Warwin’s student, they didn’t come in time for the competition — forcing her to wear what was available.

That was enough to make Warwin post the video.

“There was something in my heart that was like, ‘I just need to share this,’” Warwin said.

After sharing the video, which has more than 100,000 likes, Warwin garnered criticism. Some people said she should have provided her own tights, which she objected to. Even in this case, where she did provide her own tights for a skating show in England, she was told they did not fit the rules, she said, and a wardrobe stylist unsuccessfully dyed white tights. While Warwin received an apology, she said the situation caused her additional stress when she needed to focus on her routine.

“I should have never had to bring my own tights,” she said, “because if every other white skater in the show was being provided with tights, then I should have also been provided tights — and by doing that, had I brought my own over-the-boot tights, I would have continued the cycle of them not caring about Black skaters. We have to break that cycle, and we have to have them understand that, like, you should have provided to us what you provide to everyone else.”

Despite the negative comments, Warwin did receive positive feedback. She said posting the video sparked conversations and allowed a safe space for other Black figure skaters to share relatable experiences.

“They were happy that I spoke up about it,” she said, “because we need that change.”

Warwin recalled being driven to tears at age 10 after being teased for not wearing tights that matched her skin. In another incident, while traveling to a competition in Austria at 15, her luggage was lost, and with it went the tights she had packed. While she tried to find tights at the venue, they had none in her skin tone, she said.

Along with trying to find suitable tights, Warwin said she has experienced other challenges related to finding the right mesh dresses and hairstyles. On one occasion, Warwin said her coach requested the removal of her braids only a day after she had gotten them installed.

Meanwhile, Starr Andrews, 20, was featured in a video that went viral in 2010 for her performance to Willow Smith’s “Whip My Hair.” Now a professional skater, she said she didn’t realize the lack of diversity until she got older. In addition to feeling lonely at times, Andrews said being a Black figure skater causes pressure from proving her abilities to others.

“You’re like, ‘OK, well, you know, I have to really prove myself,’ and even though you’re skating for yourself, there’s always people watching you,” Andrews, who is friends with Warwin, said.

Similar to Warwin, Andrews said she experienced challenges finding the right tights to match her skin tone. Andrews, who is based in California, said she pays about $30 per pair of custom tights that are dyed to match her skin tone. She said it can get expensive, especially if she rips her tights, which often occurs in figure skating. She also said it’s difficult during the summer months, due to her skin tone changing, which impacts how her tights look on her.

Companies, including Brown Skin Essentials and Nude Barre, have increasingly begun providing tights and other flesh-toned garments for people of color. Another company implementing inclusivity in its product selection is Threads, a hosiery brand founded by Xenia Chen that provides sheer contour tights in five shades. The Toronto-based company’s tights are produced in Italy, and the tights are made of high-quality materials designed to illuminate the natural skin color.

Chen, who is Asian Canadian, launched the company after experiencing her own challenges finding tights that were both comfortable and affordable.

“I felt like every time you go to the department store or the drugstore and you’re buying hosiery or tights,” Chen said, “what I was seeing on the shelves — there was a huge mismatch between that and what I was seeing in real life.”

Although international manufacturers — such as Capezio, the Italian dancewear supply company — provide tights in shades for darker skin tones, Warwin said because the tights are made for dancers and not figure skaters, they do not provide warmth while she is on the ice.

Besides figure skaters, Chen said professionals ranging from office workers to flight attendants have emailed the company expressing their delight in finding tights to match their skin.

“They say things like, ‘I’m 50 years old, and this is the first pair of new tights that actually match my skin color,’” Chen said, “and we get emails like that almost every week, which I think really goes to show, like, there was such a gap in the market out there before.”

Andrews said she wants to be the first Black woman to win Olympic gold in figure skating. She also said she would like to provide figure skating lessons to more people of color.

“I feel like once you start, it’s really hard to get out of it,” Andrews said, “because skating is just so fun.”

As for Warwin, she said she wants her TikTok video to spark change. She said she sees herself in her students and wants to ensure that they have access to the same tools other figure skaters have. In order to make the sport more inclusive, Warwin said vendors need to provide multiple tights in all skin tones.