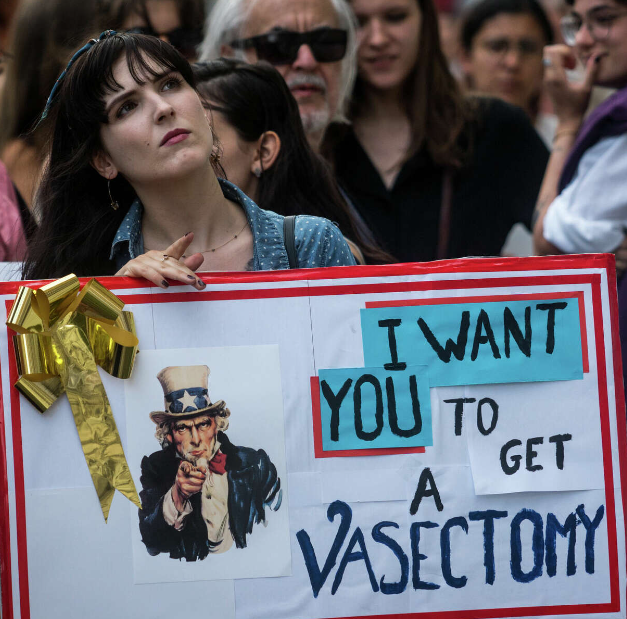 Young men are reportedly rushing to get vasectomies after the supreme court overturned Roe vs. Wade, ruling that women do not have a constitutional right to abortion.

Dr. David Robbins is a urologist based in North Miami, Florida, who performs hundreds of vasectomies every year, says calls to his clinic have been non-stop.

“I think yesterday specifically was when my staff really started to notice a change,” said Robbins.

In the state of Florida, lawmakers passed a ban on abortions after 15 weeks.

Robbins added: “Whereas we’re doing 400 to 500 a year, maybe between 8 to 16 or 20 a week, now all of a sudden just yesterday, the volume was noticeable from the staff. So I was in the operating room yesterday and the staff called me up and said wow, we got an incredible number of phone calls today. Specifically people citing this change in law.

“I did not notice really a specific change when the initial document from the Supreme Court was leaked. But more specifically now, with the change in Roe v. Wade and the potential upcoming change in Florida, it’s a precipitous change where I was doing a lot, and now the demand is sort of overwhelming to the point where I’m considering coming in on a Saturday and just knocking out 10 or 12 vasectomies just to keep up with the demand.”

Dr. Joseph Pazona, a urologist in Tennessee where there is an abortion ban, said he’s also received an influx of calls from young men inquiring about vasectomies.

“This is a safe long-term way of avoiding an oops,” said Dr. Joseph Pazona.

“I think it’s wonderful that men are starting to take more personal responsibility when it comes to family planning,” Pazona said.

One of his patients was concerned about the abortion ban.

“And I said, ‘that makes sense,'” Pazona added.

He performs 50 to 60 vasectomies a month and noted it’s usually a 10-minute procedure with no needle and no scalpel.

“As well as laughing gas for our gentlemen so they’re comfortable,” he added.

He’s prepared to double the number of vasectomies he performs due to the ban.

“I was visiting with a patient who had made the decision that he did not want to have any children, and he brought that up as one of the factors bringing him in,” Pazona said.

According to Pazona, getting tubes tied as a woman is generally more invasive than a vasectomy. His patients can even drive themselves home after the procedure.

Planned Parenthood has said in a video conference that they’ve seen an increase in calls from men about vasectomies too.