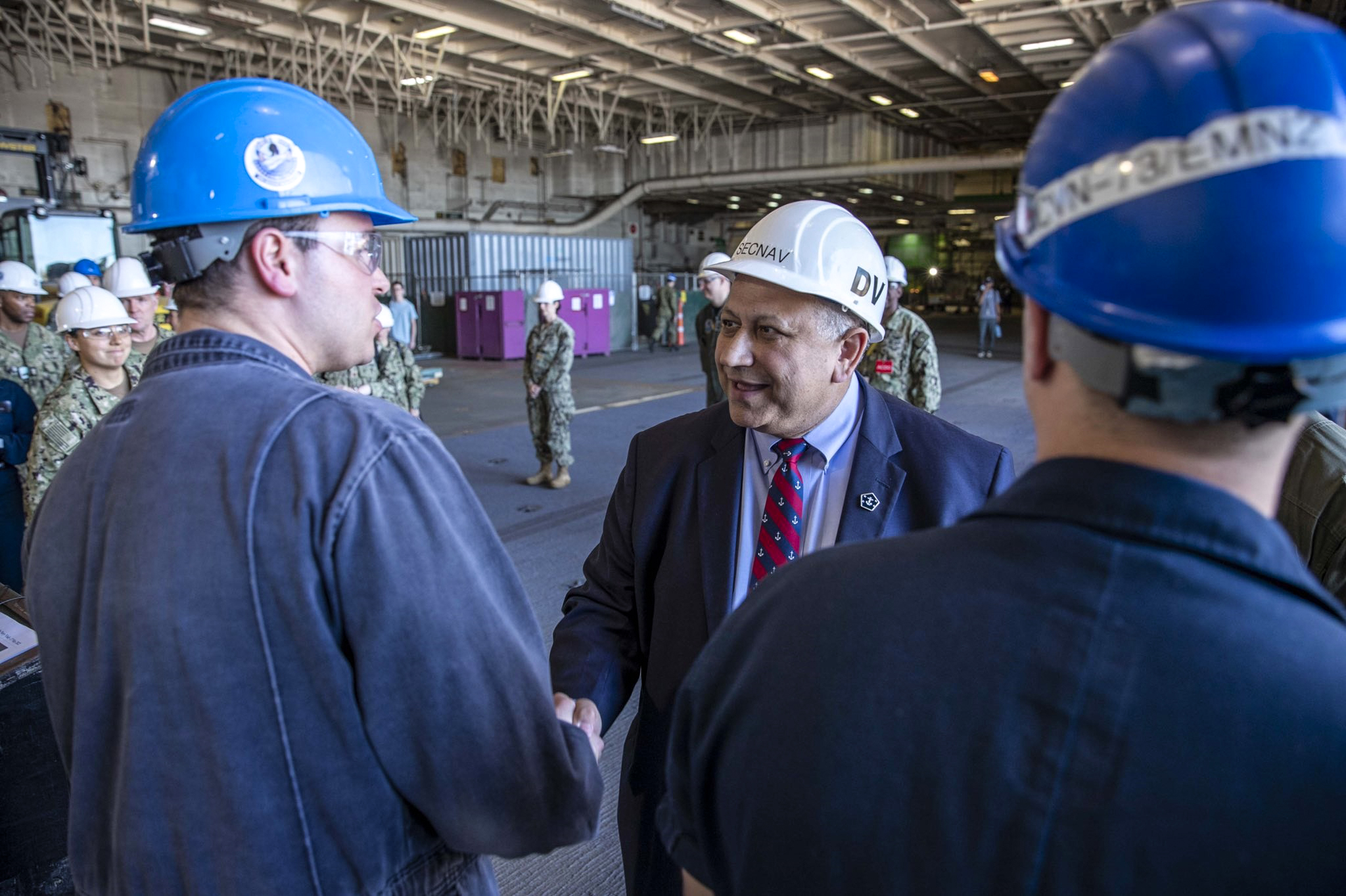 Two of the most powerful leaders in the Navy visited beleaguered sailors aboard the USS George Washington, sparking hope for some that things will improve amid a rash of suicides and a mental health crisis, although the pair did not make any concrete promises.

Their visit comes after at least five sailors on the George Washington died by suicide in the last year, including three within a span of a week last month, military officials said.

It stirred up a mixed reaction among sailors. Some were receptive, noting the pair’s high ranks within the chain of command.

“I believe things are going to change because the only people above these two men are the secretary of defense and the president. Nobody else,” said a sailor who works on the George Washington and asked to remain anonymous out of fear of retaliation.

Others were less optimistic, particularly after a controversial address by Master Chief Petty Officer of the Navy Russell Smith, the service’s senior enlisted leader, weeks earlier.

In late April, Smith disagreed when a sailor said living standards on the ship were not “necessarily up to par.” He said the sailors get to go home most nights and that they were not “sleeping in a foxhole like a Marine might be doing,” according to a transcript of the address released by the Navy.

While Del Toro and Gilday did not give an official address Tuesday, the secretary told sailors over the ship’s public address system that they were listening.

“They did promise some amount of change, but didn’t give many specifics,” said Jack Lepien, a mass communication specialist seaman, whose last day with the Navy was Tuesday.

“I hope this will improve things,” he added. “But the general feeling is still that nothing is going to change.”

The warship has been undergoing extensive repairs at the Newport News Shipyard in Virginia since 2017. The Navy said repairs will likely not be completed until March.

Several current and former George Washington sailors told NBC News that their struggles were directly related to a culture where seeking help is not met with the necessary resources, as well as nearly uninhabitable living conditions aboard the ship, including constant construction noise that made sleeping impossible and a lack of hot water and electricity.

They also said that when a ship goes through lengthy overhauls, most young crew members are relegated to cleanup and repair tasks rather than the jobs they enlisted in the Navy to do.

Del Toro and Gilday said their goal was to hear firsthand about challenges the sailors may be facing as the ship continues to undergo a delayed overhaul period.

“We want to ensure no one else feels as if their only option is to take their own life,” Del Toro said in a news release.

The secretary said he and Gilday were prepared to do more to support the sailors, but neither outlined concrete steps as to how they’d improve the conditions and culture on the aircraft carrier.

A senior Navy official told NBC News on Wednesday that there are “several things in the works to include deeper dives into some of the issues” and that recommendations would be developed and implemented “as soon as possible.”

During Tuesday’s tour, Del Toro met with the ship’s senior leadership and medical team and held group discussions with crew members, while Gilday walked around the ship and spoke with sailors.

“We all know this is hard and want to make it better,” Del Toro said.

Most of the roughly 2,700 sailors on the George Washington go home after their shifts, but about 400 who live out of state or don’t have off-site housing were residing onboard.

Since the three suicides in April, the Navy has offered to relocate those sailors into nearby military housing facilities. As of Friday, the Navy said more than 280 sailors have taken the offer, while it works to secure additional accommodations for the remaining crew.

“We want the crew’s feedback and recommendations so we can continue to take immediate actions to improve their quality of life and the availability of mental health care services,” Del Toro said.

If you or someone you know is in crisis, call the National Suicide Prevention Lifeline at 800-273-8255, text HOME to 741741 or visit SpeakingOfSuicide.com/resources for additional resources.