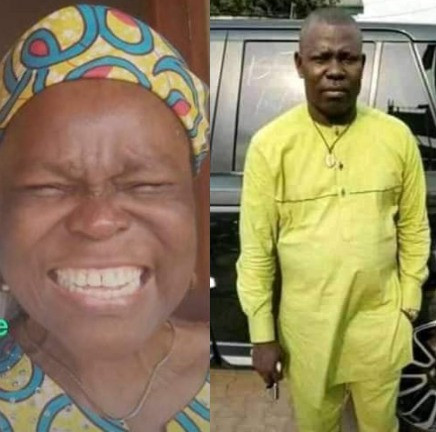 Two persons have died in a fatal accident that occurred while police officers were chasing a man in Sapele, Delta state on Tuesday, July 7. According to eyewitnesses, the police officers tried to stop a Benz SUV coming in from Benin city, however, the driver of the vehile refused to stop,  instead he started to reverse.

This forced the police officers to engage him in a hot chase. It was during the chase that the police officers allegedly opened fire at his tyres. The driver lost control and rammed into a motorcycle driver and his passenger. The motorcycle rider identified as Joseph died on the spot while the elderly woman who is said to be a primary school teacher, Mrs. Igho Avwata, died an hour later. Both victims are pictured above.

”The police  officers chased the driver from Oleh Road down to Ogorode Road. When they saw that the driver was abit faster than them, they shot one of the tyres of his car. This led to the driver losing control.

The car hit the bike man who died on the spot. A woman was on top of the bike. She fell off due to the collision. She was rushed to the hospital but could not make it. Also the driver and a female in the car believed to be the  girlfriend of the driver are in pretty bad shape.” an eyewitness said

The state police command is yet to comment on the unfortunate incident.