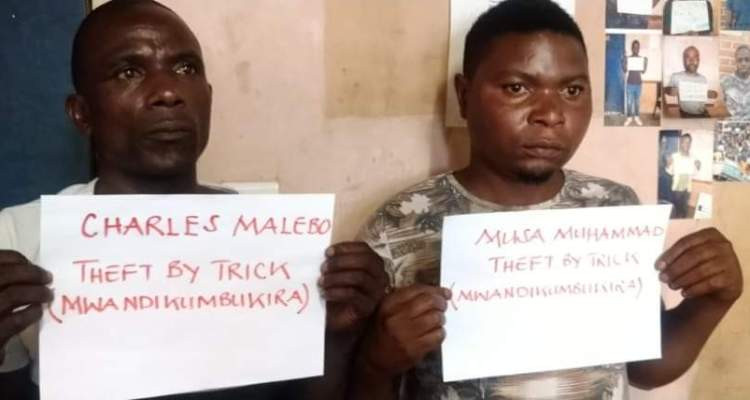 Two men have been arrested in Lilongwe, Malawi, after they swapped a woman’s money, amounting to K250,000, with useless papers.

The conmen, identified as Charles Malebo, 42, and Mussa Mohammad, 34, were arrested on Friday November 5.

According to the police, on 17 September, the woman travelled to Lilongwe to from Balaka to buy three bales of kaunjika (secondhand clothes).

She met the two at Bwalo la Njobvu at Area 2 in Lilongwe, the capital city of Malawi, and they claimed to be employees for a certain Indian kaunjika dealer in Area 3.

The duo offered to assist the lady purchase her favourite bales at an affordable price.

While travelling to Old Town in Area 3, the suspects urged the lady to wrap and tape the money in some exercise book papers.

The unsuspecting victim did as instructed and she handed the money over to the suspects. However, the conmen swapped the money with a similar bundle and handed it back to the lady.

They then told her to wait outside a “warehouse” so that they could go inside and process her transaction.

The victim, left alone with the fake bundle, waited for an hour before she became suspicious and decided to find out from the “warehouse.”

She discovered that the building wasn’t for kaunjika but rather a stationery shop. She reported to detectives at Lilongwe Police Station.

A police manhunt led to the suspects’ arrest on Friday.

They will appear in court soon to answer a charge of cheating, contrary to Section 321 of the Penal code.