A Twitter user has spoken up on the recent trending DNA issue brought back to social media after the controversy surrounding the now-dissolved marriage of comedian Nedu.

The lady with the Twitter handle @pr_titanium revealed that her brother had raised a son that did not belong to him for four years.

She also claimed that the boy looked exactly like her brother, but unfortunately, a DNA test had revealed that he was not related to their family which had consequently led to a lot of chaos. 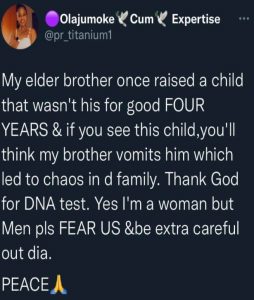 The lady also advised men to be careful of women. She said that though she is a woman, men should be scared of her gender.

Newspot recalls that OAP Nedu had made a revelation that the first child his wife had borne for him was not biologically his which had consequently led to the recent resurrection of the DNA saga in the country.

The revelation had come after Nedu’s ex-wife had accused him of domestic violence. She also replied to Nedu’s accusation of the questionable paternity of their first child as inconsequential, since she claimed she had never told Nedu the child was his and he had simply made that assumption since they were married.