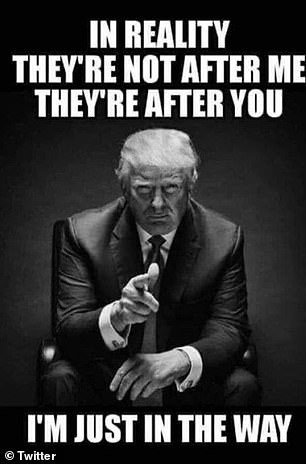 Social media company, Twitter has continued its crackdown on Donald Trump’s account by removing a meme tweeted by the US president on Tuesday, after the New York Times filed a copyright complaint over the use of the photo.

Trump posted an image of himself on Tuesday but by Thursday morning the photo had been taken down. 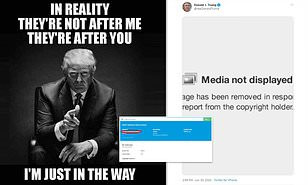 The photo was taken by NYT photographer Damon Winter for a feature on the then-presidential candidate in 2015. The black and white picture showed a smirking Trump sitting down while pointing at the camera, but was edited into a meme with bold white text saying: ‘In reality, they’re not after me they’re after you. I’m just in the way.’ 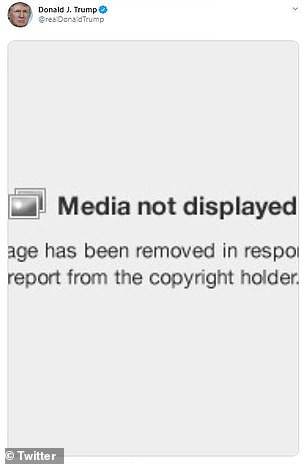 By Thursday, the photo had disappeared from the president’s account and the tweet instead showed a ‘media not displayed’ notice.

Twitter has now confirmed removing the meme saying it violated copyright policies after the New York Times filed a ‘takedown notice’ on Wednesday under the Digital Millennium Copyright Act.

‘This image has been removed in response to a report from the copyright holder,’ Twitter said ..

‘Per our copyright policy, we respond to valid copyright complaints sent to us by a copyright owner or their authorized representatives,’ the company said.

The move marks the second time in two weeks that Twitter has cracked down on Trump’s account, having previously flagged a video tweeted by the president as ‘manipulated media.’

In May, Twitter began placing fact-check warnings on tweets from Trump’s own account after he called mail-in ballots ‘fraudulent’, predicted problems with the November elections, and reacted to the killing of black American man George Floyd by a White Policeman in May.

On May 28, Trump signed an executive order that ends legal protections for social media firms, which he has accused of political bias.

The order opens Twitter, Facebook and Google up to lawsuits by diluting the legal protection which stops them from being liable for posts on their platforms.

Tinubu Is Hale And Hearty, Requires No Hospitalisation – Aide – Newspot