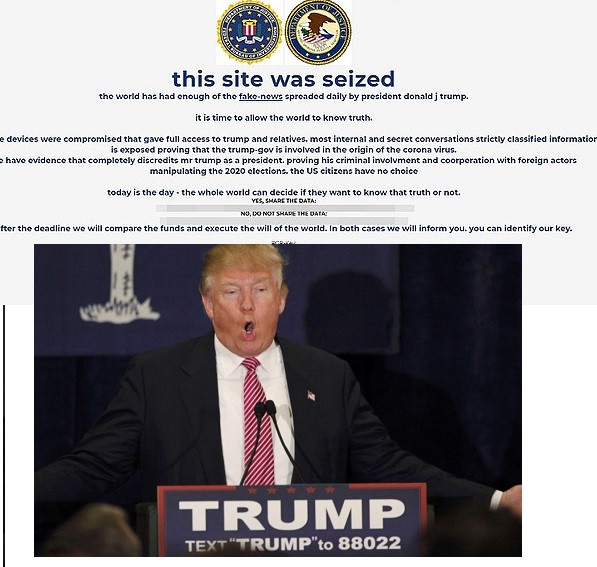 President Donald Trump’s election campaign website was temporarily “seized” by hackers who claim to have evidence that ‘proves his criminal involvement with foreign actors to manipulate the presidential election.

A message appeared on the president’s website that stated “this site has been seized” and the hackers claimed to have information that proved his ‘manipulation’ of the election.

The hackers posted a fake FBI-style seizure warning and claimed to have hacked various of Mr. Trump’s devices to gain “full access” to the president and his family.

According to the report, the website experienced difficulties at 7.20 pm ET on Tuesday but was working normally again by 7.45 pm ET.

“Strictly classified information is exposed proving that the Trump gov is involved in the origin of the coronavirus,” the hacker’s post read.

“We have evidence that completely discredits Mr Trump as a president, proving his criminal involvement and cooperation with foreign actors manipulating the 2020 elections. the US citizens have no choice.’”

The website was briefly taken offline to be fixed, with Tech observers later saying the hack appeared designed to collect cryptocurrency.

“Earlier this evening, the Trump campaign website was defaced and we are working with law enforcement authorities to investigate the source of the attack. There was no exposure to sensitive data because none of it is actually stored on the site. The website has been restored, ” said Trump campaign communications director Tim Murtaugh.

Message From The Dead Borno Farmers By Azu Ishiekwene