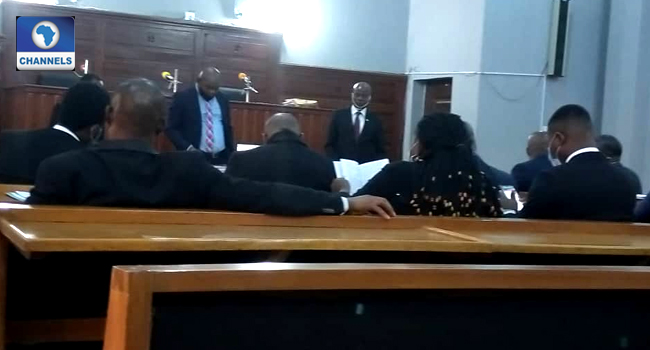 Chairman of the Tribunal, Justice Abdulrazak Abdulkareem during his inaugural speech pledged the tribunal’s commitment to complete its task within the scheduled timeframe without bias and sought counsel cooperation.

All the applications are ex-parte.

The first application is from the Action Democratic Party (ADP) and its Governorship Candidate in the Governorship Election, Emmanuel Iboi.

The parties in the petition are ADP and Emmanuel Iboi vs INEC, PDP, Godwin Obaseki, APC, Osagie Ize-Iyamu.

The Petitioner by a motion exparte asked the Tribunal for an order of substituted service on the third Respondent, Godwin Obaseki through the second respondent, the Peoples Democratic Party (PDP).

The Tribunal granted leave for ADP and Emmanuel Iboi; and a second petitioner, Tracy Agol to serve by substituted means, the petition, and accompanying processes on Governor Obaseki by pasting it on the premises of the PDP Secretariat located at first east Circular Road Benin City.

Two other Petitioners, Allied Peoples’ Movement (APM) and Action Peoples Party (APP) were granted leave to effect substituted service by handing the documents over to any staff or member of the PDP at its Edo State Secretariat.

The fifth Petitioners; Action Alliance (AA) and another were granted leave to serve by substituted means through pasting the same at the Edo State government house complex, Dennis Osadebey Avenue Benin City.

They adjourned till the 7th of December 2020 for a pre-hearing Session.

Argentines Mourn Maradona, ‘The Most Human Of Gods’ – Newspot

Argentines Mourn Maradona, ‘The Most Human Of Gods’ – Newspot