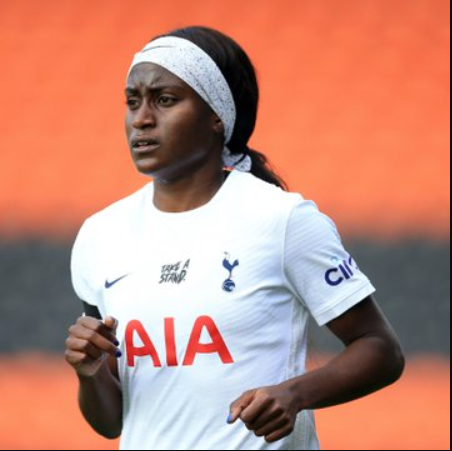 Tottenham Women forward, Chioma Ubogagu has been banned from football for nine-months  after being charged with anti-doping violation.

The FA and an independent tribunal came to the decision in April, meaning the ex-England international, who scored on her international debut in 2018, will be banned from playing until October after a provisional suspension was imposed in January.

The governing body accepted Ubogagu, 29, did not take the banned substance, canrenone, in order to deliberately gain an illegal advantage. It is banned by World Anti-Doping Agency because it is sometimes used as a masking agent.

The British-born Nigerian footballer said: ‘I am so sorry to my teammates and staff that I can’t be out on the pitch. The Club has been fully supportive throughout this entire process, and I am so appreciative of all their help.

‘My faith, family, and close friends have helped me immensely in this difficult time. I am eager to be back soon now that this has been resolved.

‘I want to make clear that the medication had no performance-enhancing effects for me, but I still made the mistake of not being as diligent as possible, and as a result I am unable to play the game I love until I serve my suspension.

‘While my dermatologist is aware of my profession, it is also my responsibility to know more about the medications I am prescribed. I plan to share my story and educate others on the severity of what can happen, and I hope I can help other athletes avoid situations like mine in the future.’

Ubogagu, who joined the club from Real Madrid in July, has said she was prescribed the medication spironolactone in Texas, United States, to treat her acne – when she was at Houston Dash – and continued to take it after her arrival in England.

Although a commission found she had committed the mistake unintentionally, it stated: ‘(Ubogagu) could and should have established that this drug was on the prohibited list and could, for example, easily have asked the prescribing doctor or the Tottenham medical staff or could have established it herself’.

A statement on the club’s website added: ‘Both the Club and Chioma fully cooperated with the FA and UKAD during the disciplinary process’.

2023 election: My govt will not compromise – Buhari to Nigerians...