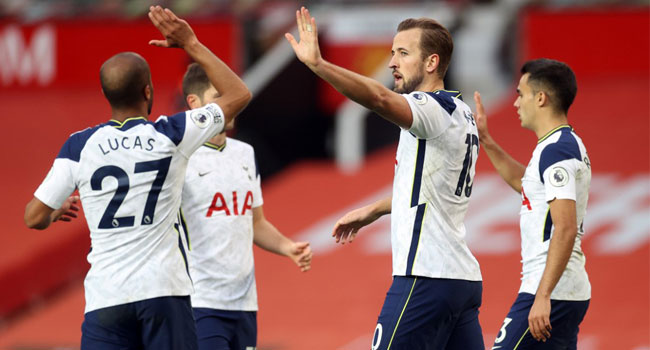 Son Heung-min and Harry Kane scored twice as Spurs opened up a disorganised United defence at will even before Martial was harshly punished for an off-the-ball clash with Erik Lamela.

Tanguy Ndombele and Serge Aurier were also on target for Tottenham, who showed no ill-effects of a draining week in their fourth match in eight days.

United’s worst home defeat since 2011 will turn the spotlight onto them ahead of the transfer deadline on Monday.

Uruguayan striker Edison Cavani is reportedly set to join the Red Devils, but it is at the other end of the field Ole Gunnar Solskjaer’s men are in desperate need of reinforcements.

Mourinho, who was sacked as United boss in December 2018, has claimed his old club are too often the beneficiaries of dubious penalty decisions. But he could have no complaints when Davinson Sanchez upended Martial inside the area in the first minute.

Bruno Fernandes coolly slotted home the spot-kick to seemingly give the home side the perfect start.

However, within four minutes it was 1-1 as calamitous defending from Eric Bailly, Harry Maguire and Luke Shaw presented Ndombele with the chance to sweep home an equaliser from close range.

Kane was the provider for all four of Son’s goals in a 5-2 win at Southampton two weeks ago and the two combined to perfection once more as Spurs took the lead three minutes later.

Maguire and Aaron Wan-Bissaka were caught ball watching as Kane’s quickly taken free-kick was perfect for the South-Korean to race through and dink the ball over the advancing David De Gea.

The visitors could have had plenty more as a poor touch from Son denied him another one-on-one with De Gea before the Spaniard saved from Aurier.

Any chance of a United revival went with Martial as he was shown a straight red card for raising his hands to Lamela’s face in retaliation to an elbow from the Argentine, which went unpunished from VAR.

Even that decision, though, could not mask a disastrous performance from United, who gifted another goal away within two minutes of losing a man.

Kane intercepted Bailly’s attempt to play out from inside his own box and when the ball broke to Son, he unselfishly squared for Kane to slot into an unguarded net.

Son had been a major injury doubt after suffering a hamstring problem in last weekend’s 1-1 draw with Newcastle, but he was full of energy as he burst into the box to flick his seventh goal of the season between De Gea’s legs.

Solskjaer introduced holding midfielders Scott McTominay and Fred at half-time in a bid to stem the tide, but United were cut open again when Paul Pogba failed to track Aurier’s run and he fired into the far corner from Pierre Emile-Hojbjerg’s perfect pass.

Pogba was at fault again for the sixth as he dived in on Ben Davies and Kane converted emphatically from the penalty spot.

A second straight home defeat to start the season drops United to just above the relegation zone in 16th, while Tottenham move up to fifth.