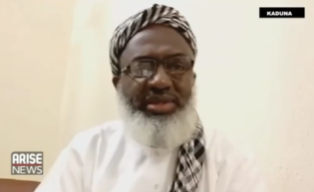 Islamic cleric, Sheik Gumi, was on AriseTv on Wednesday night, February 24, where he kicked against describing bandits as criminals.

Gumi opined that tagging bandits as criminals will only make them get angrier and carry out more attacks. He said the press are also ”criminals” for describing the bandits as ”criminals”

Gumi further said the language used in addressing the bandits is very important at this time and that that the tag ‘criminals’ should be dropped temporarily.

“You are emphasising on criminality, I don’t know. Even the Press (journalists) are criminals too because they are putting oil into fire. These people are listening to you, don’t address them as criminals if you want them to succumb.

Youths are ready to put down their weapons, now they are hearing you call them criminals, how do you want them to cooperate. So you have to show them that they are Nigerians and that they should not hurt children and that they should be law abiding, these are the language we want to hear from the Press to assist us in getting the boys.

When we talk to them in nice a wordings they are ready to put their weapons down, they are ready to listen to us, but when the language is about criminality, kill them, jail them, then this is what we will end up having,” Gumi said

Watch a clip from the interview below