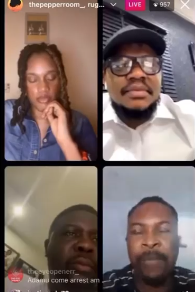 Rapper Ruggedman has tackled former Presidential aspirant, Adamu Garba over his comment on Twitter ban in the country.

In an Instalive interview he sat for with Garba and comedian Seyilaw, the rapper averred that it is troubling that the issue being discussed in the country is “ban of a social media platform” when there are many things affecting the lives of Nigerians bordering on economy and security.

When he recalled how Adamu Garba began promoting his own ‘social media platform’ after the Twitter ban was announced, the former presidential aspirant chipped in that he is a “businessman”.

Firing back at him, Ruggedman stressed that it was ill-timed and further stated that Garba shouldn’t be heartless even though he is a businessman.

Watch the video below……