A Texas clinic resumed providing abortions on Thursday to women who are more than six weeks pregnant after a federal judge temporarily blocked a state law restricting the procedure.

In a blistering opinion, US District Judge Robert Pitman issued a preliminary injunction halting enforcement of the Texas law known as Senate Bill 8 (SB), which bans abortion after six weeks, before many women even know they are pregnant.

Texas Attorney General Ken Paxton, a Republican, said he would appeal the judge’s ruling to the Fifth Circuit Court of Appeals, one of the most conservative courts in the country.

Whatever the New Orleans-based appeals court decides, the Texas law is expected to eventually end up in the Supreme Court, where conservatives hold a 6-3 majority. 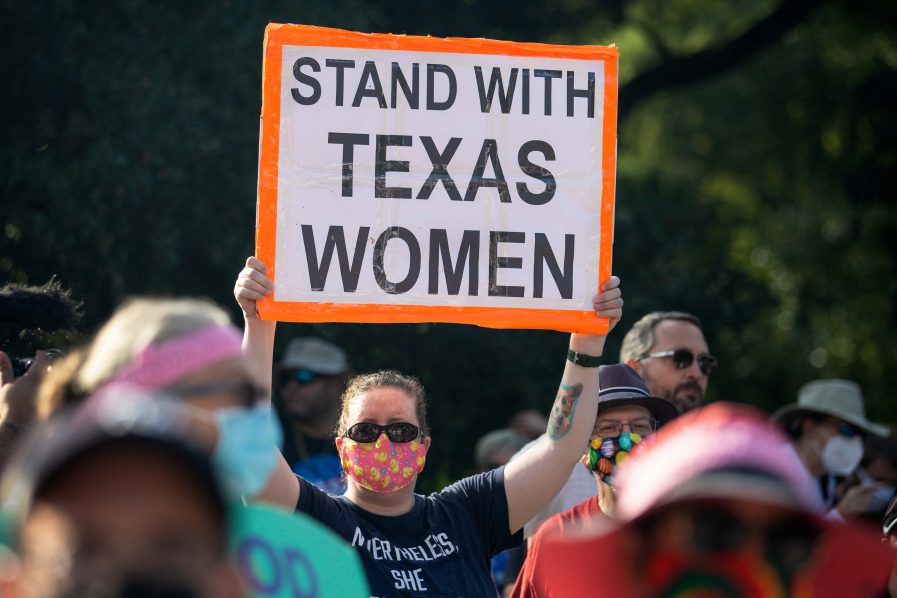 (FILES) In this file photo taken on October 2, 2021 demonstrators rally against anti-abortion and voter suppression laws at the Texas State Capitol in Austin, Texas. – A US federal judge on October 6, 2021 temporarily blocked a controversial law that bans most abortions in the state of Texas. The statue, which went into force on September 1, prohibits abortions as soon as an embryo’s heartbeat is detectable, usually at around six weeks of pregnancy, before many women even know they are pregnant. There are no exceptions for cases of incest or rape. (Photo by Montinique Monroe / GETTY IMAGES NORTH AMERICA / AFP)

Whole Woman’s Health, which operates four abortion clinics in Texas, said on Twitter that in accordance with the judge’s ruling it had resumed providing abortions to women more than six weeks pregnant.

“SB8 left our patients with two choices: carry a pregnancy to term against their will or travel out of state to receive care,” it said. “This ban hurt Texans and now we can help them.”

Pitman said the Texas law, which went into force on September 1, is “flagrantly unconstitutional” and violates the landmark 1973 Supreme Court ruling in Roe v. Wade, which enshrined a woman’s right to an abortion.

“From the moment SB8 went into effect, women have been unlawfully prevented from exercising control over their lives in ways that are protected by the Constitution,” said the judge, an appointee of former Democratic President Barack Obama.

“That other courts may find a way to avoid this conclusion is theirs to decide; this court will not sanction one more day of this offensive deprivation of such an important right,” Pitman said.

The judge’s order was in response to a lawsuit filed by the Justice Department seeking to prevent Texas, the second-most populous US state, from enforcing the abortion law, which makes no exceptions for rape or incest.

– ‘Fight has only just begun‘ –
Paxton, the Republican attorney general of Texas, said he had taken steps to appeal the ruling to the Fifth Circuit Court of Appeals.

“The sanctity of human life is, and will always be, a top priority for me,” he said.

Laws restricting abortion have been passed in other Republican-led states but were struck down by the courts because they violated Roe v. Wade, which guaranteed a woman’s right to an abortion until the fetus is viable outside the womb, which is typically around 22 to 24 weeks.

The “Texas Heartbeat Act” allows members of the public to sue doctors who perform abortions once a fetal heartbeat is detected or anyone who helps facilitate the procedure.

They can be rewarded with $10,000 for initiating cases that lead to prosecution, prompting charges that the law encourages people to act as vigilantes.

The Supreme Court cited procedural issues when it decided by a 5-4 vote last month against intervening to block the Texas law. It did not rule on the merits of the case brought by abortion providers.

After the court declined to block the Texas law, the administration of Democratic President Joe Biden entered the fray, citing its interest in upholding Americans’ constitutional rights.

Welcoming Judge Pitman’s ruling, White House Press Secretary Jen Psaki said: “The fight has only just begun, both in Texas and in many states across this country where women’s rights are currently under attack.”

The Supreme Court is to hear a challenge on December 1 to a Mississippi law that bans nearly all abortions after the 15th week of pregnancy.

It will be the first abortion case argued before the court since the nomination of three conservative justices by former president Donald Trump.

Tens of thousands of women took to the streets across the United States last weekend in protests aimed at countering the drive to restrict abortion access.

Advocates of a woman’s right to terminate a pregnancy have called on Congress to enshrine the right to an abortion in federal law to protect it from any possible reversal by the Supreme Court.

A bill to that effect was adopted two weeks ago in the Democratic majority House of Representatives but has no chance of passing the Senate, where Republicans have enough votes to block it.

Big Tech is pushing a ‘national cloud.’ Critics say Big Tech would profit from it.