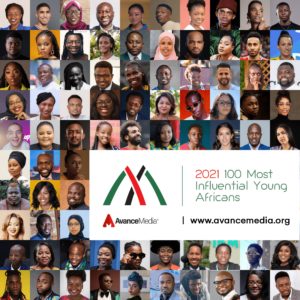 Avance Media has announced the 6th publication of its annual ranking of 100 Most Influential Young Africans, a list that celebrates the brightest and successful young Africans in various fields across the continent.

With 52 men and 48 women representing 32 countries on the continent, “this year’s publication throws a huge spotlight on various talents and personalities pursuing their dreams in pursuit of making the continent proud and setting an example for young people on the continent.”

With individuals from industries such as technology, business, entertainment, the MD of Avance Media, Prince Akpah mentioned that the continent is blessed with a lot of inspiring young people who have the power to prove the worth of the continent’s future. He also mentioned that African leaders must focus resources on training their youthful population to be ready to compete with other young people from across the world.

Nigeria leads with representation on the list with 21 people followed closely by South Africa and Kenya with 10 individuals each, Uganda with 7 and Ghana with 6 young people. Some notable names on the list include musicians Davido, Burna Boy, climate change activists such as Vanessa Nakate, Adenike Oladosu, Elizabeth Wanjiru Wathuti, Joanita Babirye, Leah Namugerwa and footballers, Mohammed Salah, Sadio Mane and Edouard Mendy.

Below is the official list of Avance Media 2021 100 Most Influential Young Africans arranged in alphabetical order. 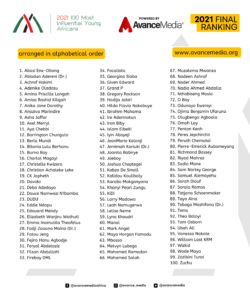