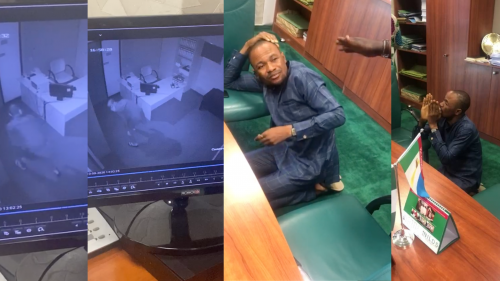 A young man simply identified as Kabiru was arrested at the National Assembly complex today October 9 after he snuck his way into the office of a member of the House of Representatives and carted away dollars and other valuable items in the process.

SaharaReporters reports that the incident happened at 2:30pm when the suspect allegedly sneaked into another lawmaker’s office located on the fourth floor of the Assembly complex using a master key. The suspect reportedly made away with the hard currency and some other office equipment including computers, photocopy machines, and printer.

It was reported that Kabiru was a Special Assistant to one lawmaker from Adamawa State and was known by many people in the complex. He was said to have been identified by security operatives, who analyzed the footage before he was arrested.

The CCTV footage from the complex showed the suspect while carrying out the operation.

This incident comes barely a week after the office of Hon. Ali Datti Yaku representing Bebeji Constituency of Kano State located on the third floor of the complex was burgled by unknown persons who made away with valuable items.