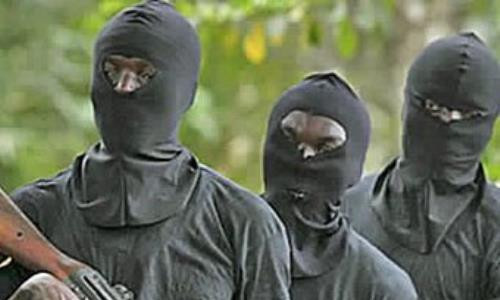 The Bayelsa State Police Command has launched a manhunt for suspected cultists who murdered four victims and set a house ablaze in the state on Wednesday, August 5.

A statement from the spokesperson of the state police command, SP Asinim Butswat said the suspected cultists at about 11pm on Wednesday, stormed the ‘Lion of Judah Church’ in Azikoro village, Yenagoa Local Government Area, Bayelsa State and shot dead four church members.

Butswat gave the names of the deceased as Alfred Marcus ‘m’ 30 years, Imomotimi surname unknown 25 years Gabriel Ejimofor ‘m’ 45 years and Uchechukwu Ejimofor ‘f’ 38 years. He added that the suspected cultists set ablaze a nearby building, damaged a vehicle and the church properties.

”Operatives of operation Puff Adder had earlier traced the hideouts of the cultists in the bush, dislodged them and burnt their camp. It is believed that this is a reprisal attack by the suspected cultists. Meanwhile two suspects  have been arrested and are cooperating with the Police in their investigation.” the statement read in part

Butswat added that the state Commissioner of Police CP Mike Okoli fsi, has visited the scene, reassured members of the community of adequate police protection and ordered for full Investigation to unravel the motive for this dastardly attack.

“I will gift my N1million win to my only parent, my mother”