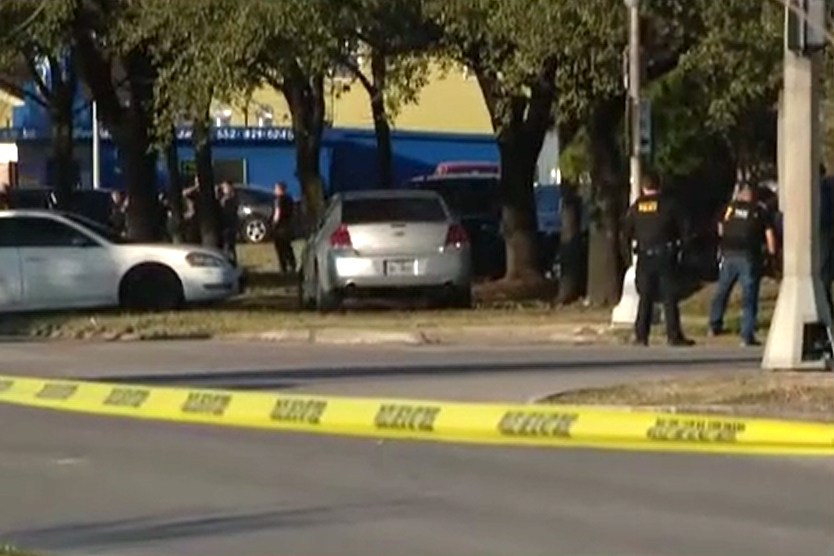 A suspect was taken into custody after allegedly shooting three police officers, carjacking a driver and barricading himself inside a Houston home on Thursday, police said.

The Houston Police Department made the announcement shortly before 8 p.m.

The suspect, who has not been identified, is believed to have opened fire with what Houston Police Chief Troy Finner described at a news conference as a “fully automatic” weapon.

The incident began shortly before 3 p.m. when police responded to a family disturbance, he said.

The suspect fired at officers, then fled the scene by car. The officers, who weren’t injured, returned fire but it wasn’t clear if the suspect was struck, Finner said.

After a pursuit, the suspect crashed and opened fire again, this time striking three officers, he said.

Houston Mayor Sylvester Turner told reporters that one of the officers was shot in the foot; another was struck in the leg; the third was hit in the arm.

Their injuries are not thought to be life-threatening, Turner said.

After the crash, the suspect carjacked a white Mercedes-Benz at gunpoint and drove to a home in a residential area northeast of downtown Houston, where he barricaded himself, Finner said.

NBC affiliate KPRC of Houston reported that loud bangs could be heard in the neighborhood after police officers arrived at the home where the man was barricaded. A witness told the station he heard what he described as 40 gunshots.

An officer could be heard telling the suspect through a megaphone that his girlfriend was concerned about him, the station reported.

A motive for the shooting for wasn’t known. At the news conference officials called on residents to help stem a recent surge in gun violence.

“These are inherently dangerous times — that was demonstrated again today,” Turner said, adding: “There are lot of guns on the street. Quite frankly there are just too many on the street and in the hands of people who will use them in a second.”

On Sunday, Harris County Cpl. Charles Galloway was fatally shot in what authorities described as a “brutal attack.” Houston police officials announced an arrest in the case hours before Thursday’s shooting.

Speaks Hands For Me By Tola Adeniyi ( Aba Saheed)

Fundamentalists now use blasphemy as excuse to kill Christians – CAN