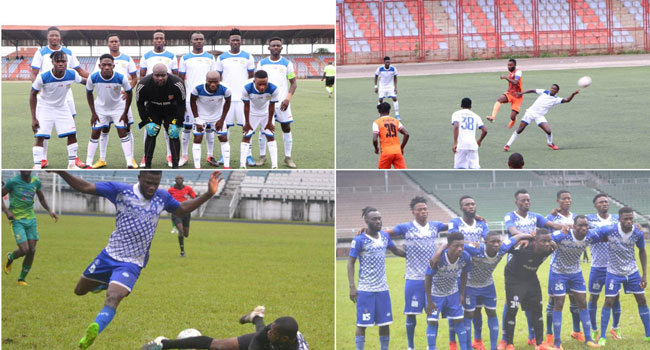 Before today’s victory, Sunday, January 31st this year was the last time the Akure Gunners recorded a league win. A 3-1 victory over Enugu Rangers on matchday 7 at the Akure Township Stadium.

After losing 2-1 to Warri Wolves on matchday 25 in Ozoro, coach Deji Ayeni who took over from Coach Gbenga Ogunbote assured them they will get it right against Dakkada. They did!

Ejike Uzoenye’s goal just before half-time was all the hosts needed to secure victory and end the miserable winless run. Sunshine Stars’ winless run of 18 matches is the longest in the league, beating the 17-game record set by Taraba FC in the 2014-2015 season.

The victory didn’t do so much for their relegation fight as they are still 19th on the log with just 24 points.

In Port Harcourt, league leaders, Kano Pillars could not repeat the beautiful show they produced against Enyimba in Kaduna on Sunday. Sai Masu Gida lost 2-0 to a determined Rivers United side.

Sunday Adetunji and Paul Acquah scored the goals that have placed the Pride of Rivers in a fine position to contest for the league title. Coach Stanley Eguma’s team are 4th on the log with 45 points.

In Aba, Enyimba FC stayed focused to beat a stubborn Adamawa United team 2-1. Mohammed Farouk scored the winning goal in the 77th minute. The People’s Elephant are fifth on the league table and has three outstanding matches.

In Lafia, Nasarawa United laboured to a 3-1 victory over Warri Wolves. The Solid Miners needed the victory after a disappointing 2-1 loss to Katsina United on matchday 25 at the Muhammadu Dikko Stadium. The win shot coach Bala Nikyu’s team to third on the log.

In Nnewi, a brace from Ekene Awazie gave FC Ifeanyi Ubah a 2-1 win over Kwara United. Jude Steven scored the only goal for the visitors.

At the New Jos Stadium, Plateau United beat Katsina United 2-0. Muhammad Zulkifilu and Buhari Ibrahim scored the goals to seal the 11th win of the season for the Peace Boys.

Tomorrow, Akwa United will take on take on Heartland FC while MFM will battle Abia Warriors.

Dubai princess says through law firm she is ‘free to travel’...