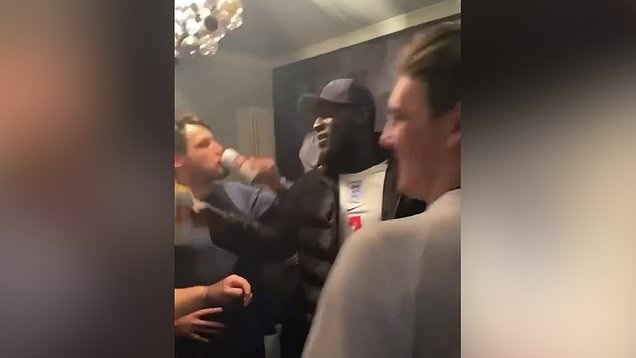 Stormzy joined the masses in celebrating England’s epic victory against Germany at the Euro 2020 by randomly popping up at a fan’s house party.

The Big For Your Boots rapper was spotted cheering on the England team at Boxpark Croydon during their big game, which resulted in Raheem Sterling, Harry Kane, Jack Grealish and co. leading us to the final 16 after winning 2-0.

Showing his support in a Grealish #7 football shirt, Stormzy was in great spirits and joined in with the raucous celebrations as full-time was called and England went through to the next round.

In footage shared by another reveller on social media, the 27-year-old and his friends were seen jumping up on the table and taking selfies while hugging.

However, his night wasn’t over there as Stormzy had apparently promised a group of fans that he would pop by their house if England beat Germany.

‘Stormz promised some random guy if England win we gotta go to his house for the after party & now we’re here drinking beer smh [sic],’ one of Stormzy’s friends captioned a video of the bash.

Proving to be a man of his word, the MC made his way to the local afterparty where the celebrations continued.

Still wearing his England shirt, Stormzy was seen on video drinking beers with the young group inside the house and dancing around outside.

Reacting to the sheer brilliance of it all, one fan tweeted: ‘We honestly don’t deserve Stormzy.’

Another said: ‘Stormzy throwing beer in the air then tryna get up on a table after that goal is GOLD.’

‘Stormzy going back to the afters love to see it,’ another said.

However, others noted that indoor gatherings of more than six people are still banned under Covid-19 lockdown measures.

One said: ‘Stormzy is a great guy and normally I would commend him for showing up at a someone’s house party, but there looks to be a lot more than six people in that house party. 40,000 fans in Wembley may give the impression that the pandemic is over, but it just seems that way.’

Stormzy, real name Michael Owuo Jr, has been keeping a low profile during the pandemic after being forced to cancel his tour last spring. However, he has made guest appearances on a few tracks, while also working on his book publishing company and philanthropy.

Solving the Plastic Shortage With an Efficient New Chemical Catalyst