The Kaduna State Commissioner for Internal Security and Home Affairs, Mr. Samuel Aruwan, has reacted to a report in which he was accused of being used to cover up a genocide against Christians in Southern Kaduna.

Taking to his official Facebook page on Sunday, November 7, Mr Aruwan said the allegations made in a publication authored by one ‘Luka Binniyat,’ was intended to damage his reputation.

My professional colleagues, I wish to address you this afternoon on recent disturbing allegations leveled against me, amounting to defamation of character, injurious falsehood and incitement of public disturbance.

On 29th October 2021, my attention was drawn to an online publication authored by one Luka Binniyat. In this publication, Mr Binniyat quoted Senator Danjuma Laah of the Southern Kaduna Senatorial District, as stating that I am being used to cover up a genocide against Christians in Southern Kaduna

Before questioning the veracity of the purported statement, I am supremely concerned first, for the implications of such a statement on the peace and security of our state, because of the religious and ethnic sentiments it has conveyed

Furthermore, as a passionate journalist on leave of absence in public service, I am acutely aware of the burden of professional responsibility which must accompany accurate reportage for the consumption of the public

Crucially also, it must be known that this material has exposed my life and the lives of my family to grave and immediate danger

You must be aware of happenings in Kaduna State within the last forty years; thousands of lives and properties have been lost, and lingering bitter sentiments are still being managed, for reasons related to the allegations now leveled against my person

You may equally be aware of the recent mob killing and elimination of an entire family in Zangon Aya, Igabi local government area, after being stereotyped, as well as the killing of some locals in the Doka general area after they were labeled ‘traitors’, simply because they were liberal in an environment of ethnic and religious hostility

As such, I have been compelled to take the following necessary steps:

1) I have reported the matter to security agencies;

2) I have requested a thorough investigation by security agencies into the publication by Mr Binniyat.

3) I have alerted the national leadership of Nigeria Union of Journalists, as well as the Union’s Kaduna State Council as a mark of respect

I have also noticed some emotional mobilization to deflect attention from the crux of this matter which is injurious falsehood and defamation, and cloak my necessary reaction as an attack on freedom of expression. This total misrepresentation of the issue is simply roguish, petty and mundane

I have therefore considered it necessary to address you on this matter, for your adequate information. This will also serve to inform you of the actions I have been compelled to take to stem the horrendous damage to my reputation intended by the author of the defamatory story

Thank you for your time. 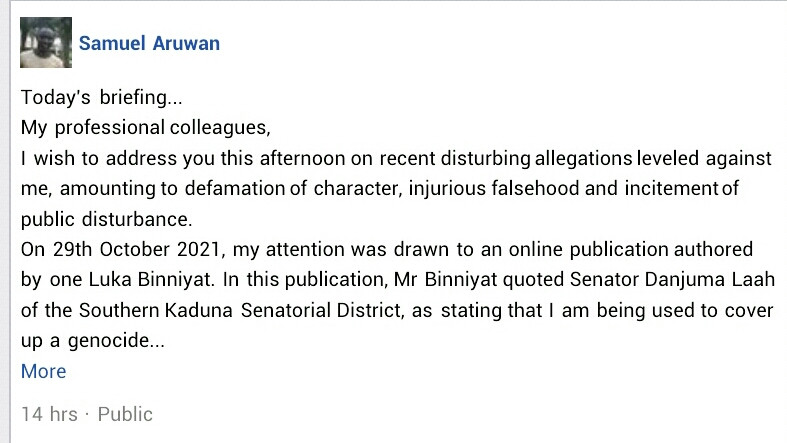 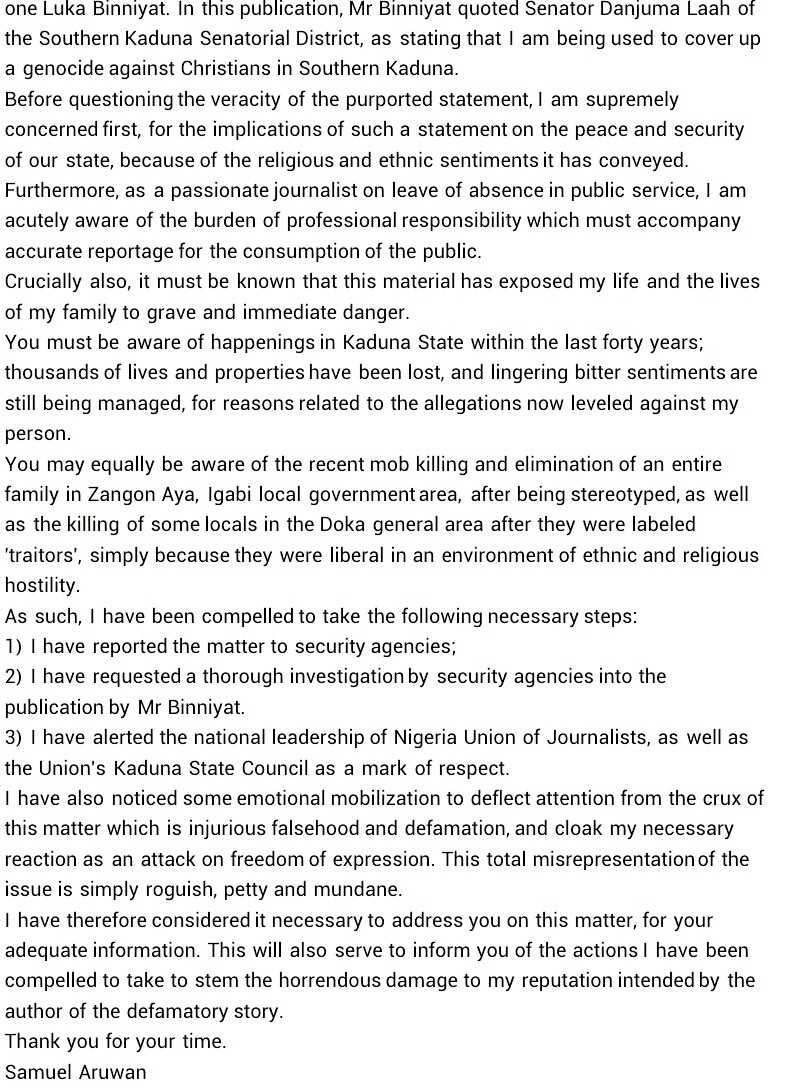