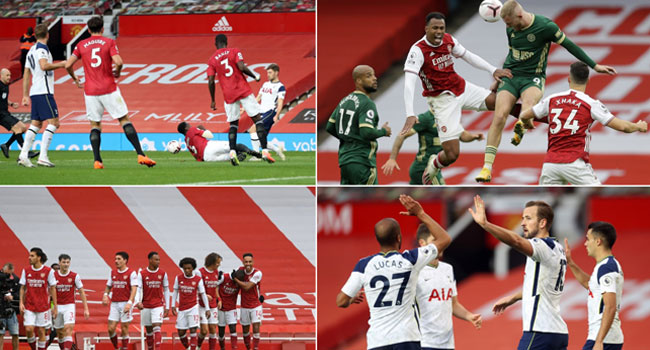 Jose Mourinho humiliated his former club Manchester United as Tottenham swept to a stunning 6-1 win at Old Trafford, while Arsenal moved into the Premier League’s top four with a 2-1 victory against Sheffield United on Sunday.

Tottenham boss Mourinho was sacked by United in 2018 after a turbulent reign, but it was his successor Ole Gunnar Solskjaer who was left red-faced after a shambolic display from the hosts.

Despite taking the lead through Bruno Fernandes’ second-minute penalty, United collapsed as they conceded four goals in the first half of a league match for the first time since 1957.

United were reduced to 10 men when Anthony Martial was harshly sent off in the 28th minute for his reaction to a push from Erik Lamela.

That opened the floodgates as United surrendered, with Kane grabbing Tottenham’s third in the 31st minute after stealing Eric Bailly’s weak pass.

United were in disarray and Serge Aurier crossed for Son’s close-range finish in the 37th minute.

Aurier drilled home in the 51st minute and Kane made it six with a 79th-minute penalty.

It was just the third time United had conceded six goals in the Premier League era started in 1992.

Solskjaer’s team have lost their first two home games for the first time since 1986 and sit just two places above the relegation zone after their heaviest home defeat since Manchester City beat them 6-1 in 2011.

Tottenham are up to fifth place after their second league win this term, ending a run of four games in eight days that included knocking Chelsea, another of Mourinho’s old clubs, out of the League Cup on Tuesday.

– Saka shines –
Arsenal have taken nine points from their opening four games as they look to return to Champions League football for the first time in five years next season.

But the Gunners were fortunate to take all three points at the Emirates as they had an early escape when David Luiz escaped a red card for a pull on Oli Burke.

Mikel Arteta’s men got going after the break and a fine team move opened the scoring on the hour mark when Bukayo Saka headed home Hector Bellerin’s cross at the far post.

Bellerin was the provider again moments later as Nicolas Pepe drove forward to curl the ball in off the far post.

David McGoldrick halved the deficit seven minutes from time with the Blades first league goal of the season, but they remain without a point.

Leicester’s perfect start came to a shuddering halt with a 3-0 defeat at home to West Ham, just a week after the Foxes thrashed Manchester City 5-2.

Liverpool can now leapfrog Leicester to move joint top of the table alongside Merseyside rivals Everton if they win at Aston Villa later on Sunday.

But just as in a 4-0 win over Wolves last weekend, the Hammers did not miss his presence as goals from Michail Antonio, Pablo Fornals and Jarrod Bowen gave the visitors a full deserved three points.

Ralph Hasenhuttl’s side dominated throughout but had to wait until the 41st minute to open the scoring when Moussa Djenepo’s clever drag-back eluded Jake Livermore before the winger stroked his finish into the bottom corner.

Oriol Romeu met Stuart Armstrong’s cross with a brilliant volley from the edge of the area in the 69th minute.