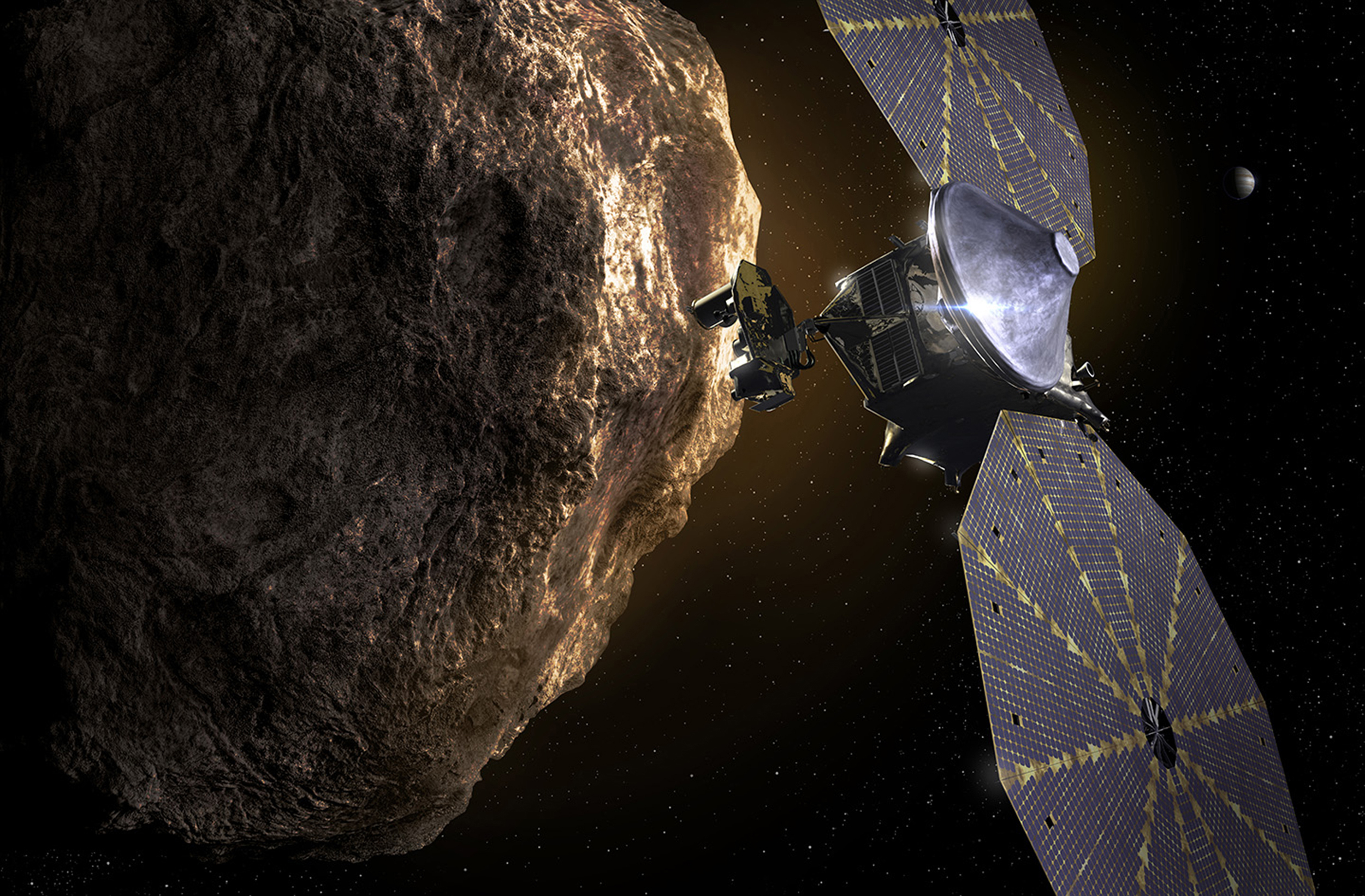 CAPE CANAVERAL, Fla. — Attention asteroid aficionados: NASA is set to launch a series of spacecraft to visit and even bash some of the solar system’s most enticing space rocks.

The robotic trailblazer named Lucy is up first, blasting off this weekend on a 12-year cruise to swarms of asteroids out near Jupiter — unexplored time capsules from the dawn of the solar system. And yes, there will be diamonds in the sky with Lucy, on one of its science instruments, as well as lyrics from other Beatles’ songs.

NASA is targeting the predawn hours of Saturday for liftoff.

Barely a month later, an impactor spacecraft named Dart will give chase to a double-asteroid closer to home. The mission will end with Dart ramming the main asteroid’s moonlet to change its orbit, a test that could one day save Earth from an incoming rock.

Next summer, a spacecraft will launch to a rare metal world — an nickel and iron asteroid that might be the exposed core of a once-upon-a-time planet. A pair of smaller companion craft — the size of suitcases — will peel away to another set of double asteroids.

And in 2023, a space capsule will parachute into the Utah desert with NASA’s first samples of an asteroid, collected last year by the excavating robot Osiris-Rex. The samples are from Bennu, a rubble and boulder-strewn rock that could endanger Earth a couple centuries from now.

“Each one of those asteroids we’re visiting tells our story … the story of us, the story of the solar system,” said NASA’s chief of science missions, Thomas Zurbuchen.

China and Russia are teaming up for an asteroid mission later this decade. The United Arab Emirates is also planning an asteroid stop in the coming years.

Advances in tech and design are behind this flurry of asteroid missions, as well as the growing interest in asteroids and the danger they pose to Earth. All it takes is looking at the moon and the impact craters created by asteroids and meteorites to realize the threat, Zurbuchen said.

The asteroid-smacking Dart spacecraft — set to launch Nov. 24 — promises to be a dramatic exercise in planetary defense. If all goes well, the high-speed smashup will occur next fall just 7 million miles away, within full view of ground telescopes.

The much longer $981 million Lucy mission — the first to Jupiter’s so-called Trojan entourage — is targeting an unprecedented eight asteroids.

Lucy aims to sweep past seven of the countless Trojan asteroids that precede and trail Jupiter in the giant gas planet’s path around the sun. Thousands of these dark reddish or gray rocks have been detected, with many thousands more likely lurking in the two clusters. Trapped in place by the gravitational forces of Jupiter and the sun, the Trojans are believed to be the cosmic leftovers from when the outer planets were forming.

“That’s what makes the Trojans special. If these ideas of ours are right, they formed throughout the outer solar system and are now at one location where we can go and study them,” Levison said.

Before encountering the Trojans, Lucy will zip past a smaller, more ordinary object in the main asteroid belt between Mars and Jupiter. Scientists consider this 2025 flyby a dress rehearsal.

Three flybys of Earth will be needed as gravity slingshots in order for Lucy to reach both of Jupiter’s Trojan swarms by the time the mission is set to end in 2033.

The spacecraft will be so far from the sun — as much as 530 million miles — that massive solar panels are needed to provide enough power. Each of Lucy’s twin circular wings stretches 24 feet across, dwarfing the spacecraft tucked in the middle like the body of a moth.

Lucy intends to pass within 600 miles of each targeted asteroid.

“Every one of those flybys needs to be near-perfection,” Zurbuchen said.

The seven Trojans range in size from a 40-mile asteroid and its half-mile moonlet to a hefty specimen exceeding 62 miles. That’s the beauty of studying these rocks named after heroes of Greek mythology’s Trojan War and, more recently, modern Olympic athletes. Any differences among them will have occurred during their formation, Levison said, offering clues about their origins.

Unlike so many NASA missions, including the upcoming Dart, short for Double Asteroid Redirection Test, Lucy is not an acronym. The spacecraft is named after the fossilized remains of an early human ancestor discovered in Ethiopia in 1974; the 3.2 million-year-old female got her name from the 1967 Beatles song “Lucy in the Sky with Diamonds.”

“The Lucy fossil really transformed our understanding of human evolution, and that’s what we want to do is transform our understanding of solar system evolution by looking at all these different objects,” said Southwest Research Institute’s Cathy Olkin, the deputy principal scientist who proposed the spacecraft’s name.

One of its science instruments actually has a disc of lab-grown diamond totaling 6.7 carats.

And there’s another connection to the Fab Four, a plaque attached to the spacecraft includes lines from songs they wrote, along with quotes from other luminaries. From a John Lennon single: We all shine on . . . like the moon and the stars and the sun.