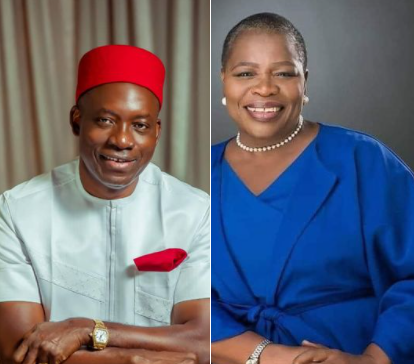 The Anambra State governor-elect, Prof Chukwuma Soludo, has appointed the former Minister of Education, Oby Ezekwesili, as the head of his transition team ahead of the March 17 handover.

Soludo, a former Central Bank of Nigeria (CBN) governor, was declared the winner of the November 6, 2021 governorship election in the state. He was the candidate of the All Progressives Grand Alliance (APGA).

He defeated the candidate of the Peoples Democratic Party (PDP), Chief Valentine Ozigbo, who came second. Although an Abuja court recently declared that the All Progressives Congress (APC) had no candidate in the poll, INEC had declared that Senator Andy Uba came third on the party’s platform.

Other members of the transition committee are yet to be announced.

ABOUT US
Newspot Nigeria is specifically to bridge the gap between the conventional media and the growing social media, special packaging of news reports and features on socio economic and political events in Nigeria, across Africa and the rest of the world. Contact: [email protected]
Contact us: inf[email protected]
FOLLOW US
© Copyright © 2020 | Developed byDominion Web
MORE STORIES