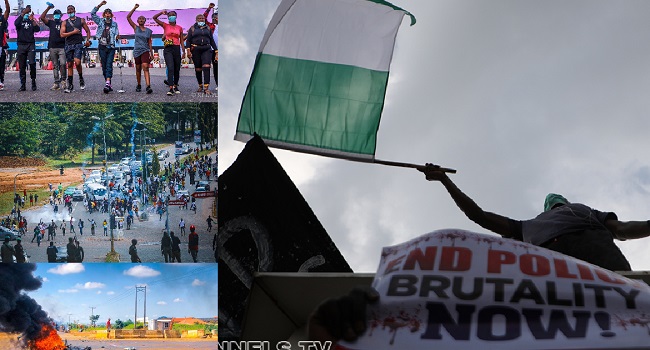 Following the unfolding national crisis that has stemmed from the #EndSARS protests, a group of “responsible and patriotic Nigerians” organised themselves and made some crucial demands from President Muhammadu Buhari.

The group called “Concerned Nigerians” said the have watched with serious concern the unfolding crisis threatening to engulf the nation and as non-partisan actors who believe in the union of the Nigerian people through the maintenance of democratic order founded on the rule of law they believe in the freedom of all Nigerians to exercise the rights guaranteed in our constitution, including freedom of speech, the right to participate in peaceful protest and in processions without harassment or intimidation from any person or authority.

The Concerned Nigerians said the developments of the last weeks culminated in a deadly attack on peaceful protestors, which from available evidence appears to be by agents of the government, thus making it one of the most serious crisis in the nation’s history.

It is on this premise that the group asked President Buhari to take six crucial steps in a bid to bridge what they have termed a widening ‘Trust Deficit’ which they believe is the root cause of protests and the ensuing violence.

Below are those six critical demands made by the Concerned Nigerians, these are decision they believe Buhari must take if the nation is to move forward in the right direction.

a. Identifying and arresting immediately the persons that gave instruction for soldiers to shoot protesting youth at the Lekki Toll Gate on 20th October 2020 4

b. Institute an urgent independent inquiry on: (i) the events at Lekki toll gate leading to the use of live ammunitions on the protestors and (ii) the apparent use of sponsored thugs or hoodlums by security operatives to infiltrate and break the peaceful protests. All those identified to be responsible for this must be held to account and prosecuted.

c. Take immediate remedial action as spelt out in the youth Charter of Demands (which they term 5For5 Demands) including the immediate release of all arrested protestors, justice and compensation for the families of victims, and an independent body to oversee the prosecution of guilty officers.

d. Address the Nation with concrete plan of implementation of the modalities and timelines for police reform.

e. Respond positively to the consensus opinion that the heads of the security agencies have performed poorly and should be relieved of office.

f. Announce urgent steps to address perennial insecurity and killings in the country particularly in the North-East and North-West. g. Finally, develop a clear workplan for the implementation of the governance reform programmes for which well-meaning Nigerians have been demanding.

The Concerned Nigerians commended the youth who have been courageous and patriotic in their demands for the protection of their rights and for a better 5 Nigeria.

They urged all Nigerians to support the young people’s demands which have been without any ethnic or religious coloration.

Protestors were urged to remain law abiding and patriotic and not to engage in any intimidation or harassment of ordinary citizens or engage in any form of violence.

They appealed to parties and stakeholders to work for speedy resolution of the crisis and strongly condemned the wanton destruction of properties, killings and maiming of innocent citizens and ethnicization by rioters and hoodlums trying to ignite a religious or ethnic conflict.

All Nigerians were urged to remain calm and avoid retaliation or taking the law into their hands.