The former Head of Interim National Government (ING), Ernest Shonekan, has been buried, ending a four-day funeral rite that began on Monday.

Shonekan was buried at Ebony Vaults in Ikoyi, Lagos on Friday after a funeral service held at the Cathedral Church of Christ.

Osinbajo, who led the Federal Government delegation, described the late Shonekan as a man of integrity, saying he steadied Nigeria’s ship at a turbulent time. 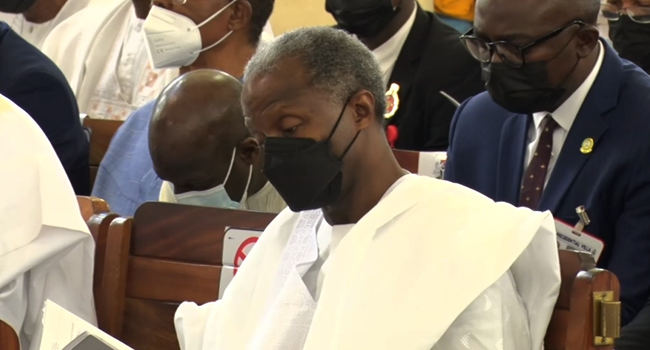 “Ernest Shonekan lived an extraordinary life. But perhaps what deserves greater attention is the way he carried himself through life and the high values he exemplified,” the Vice President said.

“That genuine respect that he had for all people of all classes, religions, and tribes, his unflinching belief in the inherent goodness in everyone, his love and generosity not just for his family but to all.

“His knowledge and experience-driven leadership and counsel that he provided always with unfailing humility and courteousness; these were the unique virtues that underpinned his extraordinary achievements.”

In his tribute to Shonekan, Gbenga Daniel said he lived a purposeful life, urging Nigerians to emulate the former elder statesman.

“We must not be too much in a hurry,” the former governor told reporters after the funeral service. “God has a purpose for us.”

Shonekan Was Consequential As Private Sector Leader, His Death A Major Loss – Osinbajo

‘He Was A Man Of High Values’; Osinbajo Extols Shonekan

Friday’s burial was the culmination of funeral activities for the founder of the Nigerian Economic Summit Group (NESG). Earlier, a service of songs and a Christian wake keep/night of tributes were held for Shonekan in Lagos.

At the service of songs on Thursday, Governor Sanwo-Olu said the deceased “had a good run” and urged the family to take solace in the legacy laid by the third oldest surviving Nigerian Head of State after Queen Elizabeth II and General Yakubu Gowon.

“Chief Shonekan was Nigeria’s interim President, he was an astute lawyer, an elder statesman, a doting father, and the dear husband of Mama Margaret Shonekan,” the governor noted.

Before the burial, President Muhammadu Buhari had also extolled Shonekan who he said left a ”flourishing business career to become the Head of Government, at a delicate time when the country needed someone of his calm mien and pedigree to save the ship of state from sinking”.

Buhari said the country owes a great debt to the former head of ING, noting that despite being at the twilight of his lifetime, he never stopped believing in Nigeria. The president had later paid a condolence visit to the late Shonekan’s family in Lagos.

Prior to the burial, the Lagos Government had announced a 13-hour closure of roads leading to Marina where the funeral took place. Shonekan was born on the 9th of May, 1936, attended the CMS Grammar School and Igbobi College. He was head of the interim national government between August and November 1993.